In the 1990s the Tshwane municipality in South Africa engaged in a number of failed projects with waste pickers. These included a project that hired waste pickers to make crafts out of recyclable material. It also included at a private company with interests in waste management helping waste pickers to set up cooperatives and run buy-back centres for the cooperatives. However the positive that came out of these failures was that waste pickers formed committees on dumps and this provided the base for independent organizing.

But what lessons and openings for organisation emerged in this period?

Firstly it became clear that projects could not just sell waste made from recyclables if they wanted secure incomes for waste pickers.

Also this history showed that waste pickers perform a valuable service because they save airspace and extend the life of landfills. So if the municipality can’t or won’t offer pickers employment, or if pickers prefer self employment, it should offer to pay them for diverting recyclables from landfills. .

In Diadema, Brazil, for example, local government pays waste picker cooperatives the same amount per tonne for recyclables that they stop from going to the dump as it pays to waste disposal companies.

Another lesson is that municipalities need to help democratic, waste picker controlled co-ops to grow by bringing in organizations with experience in developing co-ops to support them and by ensuring that they develop skills to run co-ops. Municipalities should only bring in recycling and waste industry experts when they need to assist on technical issues.

Local government should also acknowledge that waste pickers are working on municipal land and providing a key service to the municipality by providing them with safety equipment such as overalls, gloves and safety shoes.

As part of the municipal projects, Tshwane waste pickers were assisted to form committees on each of the landfills. Once the municipal projects collapsed they moved towards independent organisation as they created self- run committees that focused on improving their conditions. In 2009, they formed a city-wide network of committees called Rekopane Recycling Revolution (RRR). This Network consists of committee members from Tshwane’s seven public and one private landfill.

These committees operate informally. They do not hold regular elections nor do they have constitutions. Still, they are powerful forces that have the support of most waste pickers on landfills. Committees are generally made up of 11-16 members and have a chairperson, deputy chairperson, secretary, deputy secretary and treasurer.

An equal number of women and men sit on committees although there are still fixed ideas about who does what job. Older men are usually elected as chairpersons because people feel they command the authority to enforce decisions, while women serve as deputies or general members. Foreign workers tend to be left off committees. It will be important for RRR to reflect on how it can become truly gender equitable and represent all waste pickers on the landfills regardless of their ethnicity and nationality.

Members give many reasons for serving on committees. Some include bringing order to the landfill and working cooperatively and responsibly with others. Also they want to fight for their rights and better conditions and prevent corruption.

Developing waste pickers’ skills is also a big issue. They want such skills as being able to speak to large groups of people, improving their English and gaining confidence to deal with government authorities.

RRR outlined its priority tasks. These are to create safe and orderly environments by tackling violence, theft, alcohol and drugs and ensuring people don’t steal or damage trucks coming to landfills. They also want to end the harassment of women.

Committees have also expressed the desire to prevent new people from working on landfills and they are prepared to exercise violence against newcomers. This is clearly an area that waste pickers need to reflect on and to remember that they were also once desperate newcomers.

Members aim to hire private security guards to protect their materials at night and to get formal recognition from municipalities including the ability to negotiate better working conditions.

The committees want to find new buyers and share price information with other landfills so that waste pickers can negotiate better prices.

The need to improve price negotiations with buyers sparked the idea to form RRR. RRR organized around the drop in prices linked to the global economic crisis and also that buyers were paying different prices at different dumps and playing pickers off against each other.

However, as the Network grows, it is also discussing ways to engage with the municipality as well specific dump problems and how to resolve them.

For example, when a waste picker repeatedly harassed women, the RRR held a debate and decided the man could no longer work at the dump. The Network has the authority to enforce such decisions.

Representatives from all landfill committees meet on the first Thursday of every month to discuss and take forward issues that affect them all. Each month the meeting is held at a different landfill. The waste pickers at the host landfill provide a hot meal and refreshments for delegates and each landfill covers the costs of their representatives attending meetings.

The Network has engaged buyers in different ways. Waste pickers at Network meetings have helped each other find new buyers and to establish common prices. RRR invited groups of buyers to a meeting to explain their lower prices to them and to put forward a fair deal.

The buyers were impressed at how well organized the waste pickers were and how they organized the meeting. This has changed their ideas about them. From now on they will start to treat waste pickers more seriously as business partners. Also by forcing buyers to explain their drop in prices, pickers learnt how their work is affected by the global economy.

When waste pickers realized how little buyers valued their work, they felt determined to form co-ops and buy vehicles and equipment, and start selling directly to manufacturers.

Inspired by Network discussions about the power of organizing collectively and removing middlemen, waste pickers at Ondestepoort landfill formed a co-op called Yebo Rekopane Recycling (Yes, We All Work Together Recycling). In 2010, the co-op had 66 members which aimed to buy and sell material and purchase, with collective profit, a truck, bailing machine and a shelter.

The greatest challenge facing the co-op is raising money for new activities. Using profits from the new activity of crushing glass, it used Network contacts to sell this and with the profits the co-op bought plastic and employed a woman to weigh materials for bulk selling to buyers.

Other committees inspired by Ondestepoort now also want to form co-ops. They share information on how to build co-ops at RRR meetings and also look at the experiences of co-ops in other cities, through the South African National Waste Picker Network.

It is through sharing ideas and information and developing a common identity that the RRR is achieving success. This has included developing common rules on how waste pickers can take responsibility on landfills. Its collective identity has also allowed it to present the municipality with a common set of demands.

Although the municipality has not yet responded to them, waste pickers believe the RRR will give them the strength and knowledge to successfully engage with it.

Within its first year alone, the RRR has had much success. It took on buyers, formed co-ops, shared information, built organization and created a strong common front. 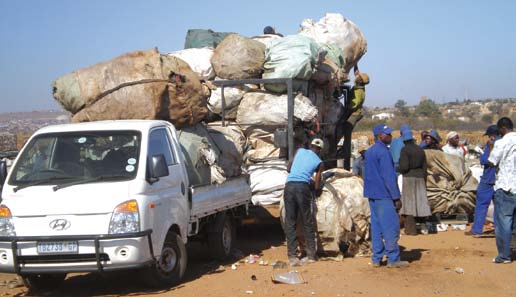