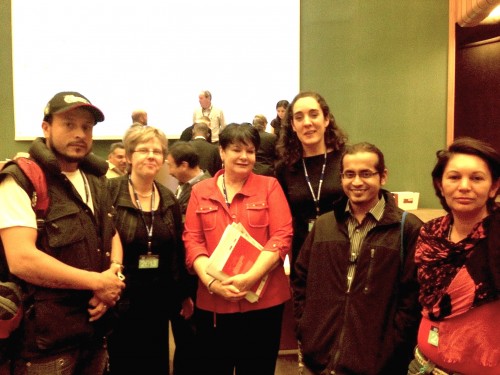 Preparing for this year’s ILO Conference

Since 1919, the United Nation’s International Labour Organization (commonly known as the ILO) has hosted its annual International Labour Conference (ILC). The theme of this year’s Conference, held throughout 3 weeks of June in Geneva, Switzerland was, “Building a Future with Decent Work.” While this same theme was featured the last time at the 1990 Conference, the ILO acknowledges that things have changed dramatically and that it was time to revisit the discussion. One of the key discussions at the Conference was “Sustainable Development, Green Jobs and Decent Work”.

Over the past decade, Women in Informal Employment: Globalizing and Organizing (WIEGO) has been officially accredited to participate at ILO Conference as a non-governmental organization. It has helped facilitate the participation of informal workers – domestic workers in particular – and brought the discussion about the role and importance of the informal economy to the table.

WIEGO saw this year’s theme as an opportunity for the waste pickers’ sector – one that has represented an integral but unrecognized green livelihood for decades – to finally participate in the ILO Conference. It invited some of the oldest and strongest waste pickers’ organizations in the world to join its delegation to learn about the internal ILO process and establish their presence for the first time at the Conference. Those organizations were KKPKP (India), ARB (Colombia) and MNCR (Brazil). Together with WIEGO colleagues, the delegates actively participated in the discussions that took place between June 5th and 20th in Geneva and engaged in discussions with other groups and key players. Prior to the visit, WIEGO European Advisor Karin Pape, together with Lucia Fernandez, WIEGO Waste pickers’ Program Coordinator, intensively planned the delegation’s agenda and consulted with ILO staff, the International Trade Union Confederation (ITUC), the ILO’s Bureau for Workers’ Activities (ACTRAV) and other actors. This laid the ground for the WIEGO delegation to be an integrated part of the workers’ group at the ILC as well as being well received by many ILO departments and key actors.

Establishing a presence at the ILC

During the first week of the Conference, after attending several sessions of the Workers’ and Tripartite Committees on Sustainable Development, the delegation discussed and defined concrete points to be considered in the Conclusions. Reached at the end of every conference, these Conclusions can eventually lead to conventions and recommendations.

(Conventions are defined as legally binding international treaties that may be ratified by member states. Recommendations are non-binding guidelines. In many cases, a convention lays down the basic principles to be implemented by ratifying countries, while a related recommendation supplements the convention by providing more detailed guidelines on how it could be applied. Recommendations can also be autonomous – that is, not linked to any convention.)

The goal of the delegation was to ensure that the general Conclusions of the Conference clearly point to recycling as one of the key sectors in green jobs and sustainable development as outlined in the preparatory office text. Discussions in the workers’ group, initiated by the waste picker representatives, ensured that the group would insist on keeping this in the text.

The group had a clear and direct conversation with the chairperson of the Workers’ Committee and other key delegates and was able to get its main points across. In order to make a maximum impact on the final Conclusions, the delegation and allies distributed a position paper prepared by WIEGO (“Waste Pickers: The Right to Be Recognized as Workers”)  prior to the Conference and a statement of key demands that the group drafted together while in Geneva.

The ILO’s website explains that at this year’s Conference, for the first time in its history, government, worker, and employer delegates came together to agree on a common vision and guiding principles to achieve a transition to a greener economy through the discussion on Sustainable Development, Green Jobs, and Decent Work. A committee made up of 174 delegates from governments, employers and unions from around the world reached its conclusions on June 19, which were then adopted at the plenary session.

“The greening of economies presents many opportunities to achieve social objectives: it has the potential to be a new engine of growth, both in advanced and developing economies, and a net generator of decent green jobs that can contribute significantly to poverty eradication and social inclusion,” the Committee on Sustainable Development stated in its Conclusions.

In the concluding session on June 19th, the recycling sector was mentioned as one deserving of particular attention – along with agriculture, construction and tourism – to be prioritized in the future creation of green jobs. It was the first time recycling had been given priority in the concluding statements.

Understanding the ILO and searching for new allies

The waste pickers’ delegation also participated in several side meetings, events, and trainings that WIEGO organized. Included in the side meetings was a session about the ILO’s origins, the Conference as a process that involves governments, workers and employers from 185 countries, and the ILO as an international organization with its head office based in Geneva. They met with the Cooperative Branch at the ILO’s Enterprises Department, as well as the Sectoral Activities Department, which is now working with e-waste cooperatives and representatives from ILO’s ACTRAV, The delegates distributed many waste picker-related publications prepared by WIEGO, as well as a recent report on e-waste in Delhi, published by Chintan. Others included a report on job creation through recycling in the US by the Global Alliance for Incinerator Alternatives (GAIA).

The waste pickers’ delegation also gave presentations in sessions of the “Nordic School”, a group of key Scandinavian trade unions which come to ILO conferences every year for a thorough ILO training. The delegation also met all Latin American trade union coordinators of the Friedrich Ebert Foundation. Some of the participants heard about waste pickers and their organizations for the first time and were impressed by learning about their work and lives and how they struggle to improve their working and living conditions.

The delegation received a positive response, as representatives from the Cooperative Branch and Sectoral Activities Department, the Green Jobs Department, which the delegation also met with, expressed interest in collaboration on a global waste management strategy that would include the informal sector. WIEGO will be following up with the departments and keeping waste pickers’ organizations informed, as well as requesting their input and participation.

One of the highlights of the team’s participation in the Conference was the speech that Nohra Padilla, the Colombian delegate, delivered during the plenary session on June 13th. This was the first time in history that a waste picker had addressed a plenary audience at an ILO Conference. Addressed to the Committee on Sustainable Development, the speech — co-written by Brazilian delegate Alex Cardoso with assistance from Lucia Fernandez, coordinator of WIEGO’s Waste Pickers’ Program — calls for the recognition of waste picking as an existing green job (performing 90 percent of the world’s recycling) that needs special attention and improvement.

The speech includes a list of demands, beginning with recognition of waste pickers’ contributions to sustainable development. It also calls for assistance in the formation of cooperatives, economic justice for the informal recycling sector, and the social inclusion of waste pickers as governments transition to becoming more sustainable, among other demands.

Another highlight was a meeting with the ITUC General Secretary Sharan Burrow, who invited the waste pickers to the ITUC Congress in 2014 because “green jobs” will be one of the priority topics of discussion. She welcomed the collaboration between the ITUC, WIEGO and the organized waste pickers. It was a wonderful surprise to find so many potential new allies for waste pickers. One example is David Boys, of Public Services International, a global trade union federation dedicated to promoting quality public services. Like waste pickers, PSI is fighting against the privatization of solid waste management services.

Looking to the future

Looking towards the future of waste pickers’ involvement in the ILO process, it’s worth taking a look at the international recognition of other labor movements. For example, capture fisheries and aquaculture were given “special attention” status as a group with particular needs and have had their Work in Fishing Convention since 2007. Domestic workers, after decades of struggle, had their Domestic Workers Convention adopted in 2011. The list of ILO conventions adds up to 189. These international laws aim to improve labor standards worldwide. A few other examples of conventions whose goals are to improve the situation for the working poor include those of home-based workers, night workers, safety and health in agriculture, maritime workers, as well as indigenous and tribal peoples, just to name a few.

These international processes take a long time and much effort. This is why it’s important that the waste pickers’ community consider and discuss whether it wants to commit to this international process. More than 20 years were needed to open the door to discuss sustainable development at the ILO and more than a decade to discuss the informal economy.

Now that that door has finally been opened, it’s time for waste pickers, advocates and the international labor community to ask ourselves: would sustainable development be possible without waste pickers? What can we do to make sure that waste pickers become a recognized and protected labor force? What kinds of possibilities can we envision with waste pickers playing a key role in sustainable development and the growth of green jobs? We certainly don’t know the answers yet but at the ILO Conference last month, the WIEGO/waste pickers’ delegation began to raise these necessary questions. It’s a long sought-after and deserved beginning!

In the following months, WIEGO will be preparing for the 2014 and 2015 ILO conference, which will have as a theme, “Transitioning from the informal to the formal economy.” It is crucial that workers of the informal economy — among them waste pickers — begin to discuss among their organizations as well as with their countries’ union leaders so that a strong presence of organized informal workers will mark its presence at the next negotiations in Geneva.

Alex speaking about the cooperatives and MNCR to the Cooperatives Branch at the ILO. Photo: Lucia Fernandez.

Meeting with David and Andrea of the ILO Sectoral Activities Department, which is working with e-waste. Photo: Karin Pape

The office of the Sustainable Development Committee. Photo: Alex Cardoso

Meeting with the Sustainable Development Committee.

Edmundo of ILO, meeting with the delegation. Photo: Karin Pape

The miner and the recyclers. Photo: Lucia Fernandez.

Harshad Barde speaking at the panel of the Nordic School. Photo: Karin Pape

Kolping and Peace and Justice meeting with the delegation. Photo: Karin Pape

Preparing the speech to be delivered at the plenary. Photo: Lucia Fernandez.

Preparing the speech to be delivered at the plenary. Photo: Alex Cardoso.

The delegation peparing changes to the text of the Workers’ Committee. Photo: Karin Pape

The Workers’ Committee working on a Saturday after a long night of work. Photo: Alex Cardoso
Tweet
| Events Reports |
Comments Off on Presente! Waste pickers participated in this year’s ILO Conference
Comments RSS feed for this post.
Loading Comments...