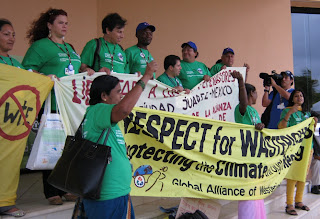 The Global Alliance of Wastepickers and Allies denounced the situation of 15 wastepickers (pepenadores) in México, who were arrested on November 25 in Ciudad Juarez after protesting a dumpsite closure that would leave 200 wastepicker families without livelihoods. They also protest a contract that was recently signed to close a major dumpsite in México City, named ‘Bordo Poniente,’ where now there are 1,500 families that live from the collection, sorting and recycling of waste. “How is it possible that we recycle here in Cancún and at the same time terrible things happen outside? For some, recycling here in México is treated as a crime,” said Eduardo Perez, grassroots recycler (clasificador) from Uruguay.

Josefat Flores Montiel, from Apaxco, México, gave his testimony as a victim of incineration. “We call for an end to the burning of toxic waste by the Holcim Company, and the closure of its affiliate plant Ecoltec. The company has caused the death of workers, skin, and genetic problems. They call this waste-to-energy but it is neither a real nor clean development solution.”

The Global Alliance of Wastepickers and Allies expressed hope that governments will create a Global Climate Fund with direct access for workers and communities, stop trashing the climate, and respect the work of wastepickers and their resource recovery projects.