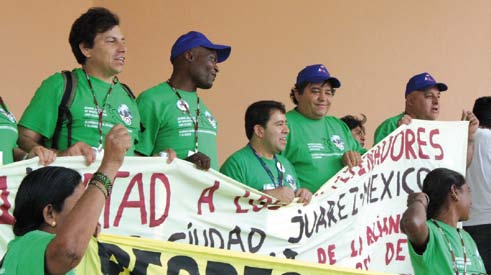 Here we go again, the yearly United Nations (UN) climate summit is approaching in Durban at the end of the year, with its usual endless list of strange words that make us scratch our heads in confusion.

Why do people make such important issues around climate change, waste and waste pickers so complicated when it comes to making agreements that respect grassroots communities and the environment?

Did you know that the climate summit is in fact called COP? What does it mean and why is it important to us? Let’s try to get the basics right to make sure we don’t miss the chance to participate in this important opportunity for grassroots communities to shape the future of our planet.

Waste pickers are one of the frontline communities that can do most for the environment, as collecting recyclable materials is one of the easiest and cheapest way not to waste the climate…

What is climate change?

Climate change is the rise of the global temperature as a result of putting lots of man-created pollution into the atmosphere.

In short, the planet is getting a bit hotter, and this is impacting severely on many places: the ice is melting in the Pole North, sea levels are rising and flooding small islands, crops die waiting for rain that never comes, people and animals suffer from starvation, strong winds make coastal cities collapse under heavy tornados…

The problem is now at an alarming stage: climate change is already happening, and it has become the biggest challenge humanity has ever faced.

Why is this happening?

Industries have been expanding enormously in the last decades at a very high cost for all of us. Fabrics, transport systems, intensive agriculture and other means of intensive production, have let out lots of pollution into the atmosphere creating a layer of gases that is now surrounding the globe.

This is known as the greenhouse effect: the pollution (different kinds of greenhouse gases) surrounds the planet and does not allow any cooling down, the same as if we left on our coat on a summer hot day.

Forests and oceans normally help to refresh the planet, but now the amount of pollution is so huge that the only way to cool down the planet is to stop emitting more of these gases into the atmosphere.

Rich countries, responsible for dirty industries, have polluted without paying for it and now most of them are even resisting slowing down pollution rates. They are delighted to carry on with an economy based on producing and consuming at an ever increasing rate, without caring that this is increasing pollution and wasting resources. The more we consume, the more we waste…but plastic, wood, and metals are not forever! One day they will be finished too!

How can waste pickers help?

Waste pickers are already doing a great job in stopping climate change, as collecting recyclable materials prevents the new production of goods and therefore prevents a lot of pollution.

At the moment there are around 15 million waste pickers in the world, a very powerful work force to reduce the amount of waste that goes to the landfill through real reduction of polluting emissions.

The COP (Conference of the Parties) is a giant international delegation from 192 countries that meet to discuss how to address climate change. In Durban it will be the 17th in a series of United Nations conferences on climate change, in which the UN has to ensure that developed countries finally agree on reducing their greenhouse gas emissions.

By 1997 negotiations had progressed towards the Kyoto Protocol, a treaty that would bind signatory countries to emission reductions to be reached by 2012. Now the Kyoto Protocol period is about to finish but some countries like Japan, Russia and Canada are resisting the renewal of their commitments to reduce emissions within a new treaty.

Sure! One of the positive outcomes from last year Cancun’s COP was the establishment of the Green Climate Fund. This Fund will hopefully channel money from rich countries to poor countries as a payment for their historical, large contribution to climate change. The Fund is meant to cover the financial needs of climate change, both to prevent an increase in emissions and temperature increases, and also to help communities adapt to some of the climate catastrophes.

Specifically, we have argued for a direct access mechanism to the Fund to allow national and local governments, and civil society to participate and benefit. This is a major Fund and it is very important to make sure it is set up with the right principles from the very beginning.

GAIA, WIEGO and the Global Alliance of Wastepickers have attended the UN climate conferences on several occasions to offer our solutions to climate change, and to protest false solutions such as ‘waste-to-energy’.

We have also been part of the climate justice movement. We defend the fair treatment of all people with the creation of policies and projects that counter climate change systems that continue discrimination.

Through demonstrations, press conferences, side-events, conversations with delegates, and actions held together with other allies within the climate justice movement, waste picker leaders from all over the world have united and defended grassroots recycling and composting as the fastest and cheapest way to fight against climate change.

The Durban COP17 will be a crucial time to see how the Green Climate Fund develops and what the future holds for international climate negotiations. Waste pickers can raise their voices for truly just and grassroots-focused solutions that recognize their valuable contribution in the struggle against climate change.