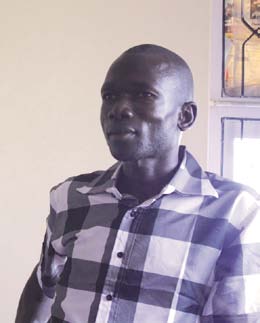 Aliou Faye, of Bokk Diom, discussing alternatives with Senegalese authorities from what he learned in India. Photo credit: Lucia Fernandez.

Aliou Faye is a 34 years old Senegalese waste picker who has worked in Mbeubeuss landfill in Dakar for the last 16 years. He is vice-president of the waste pickers’ organisation in his landfill, Bokk Diomm.

This organisation was set up in 1995 as a result of waste pickers’ frustration with people’s lack of recognition for their work. They needed a place to talk about landfill issues and to build solidarity among workers.

Since its creation more than 15 years ago, Bokk Diomm has been an important source of support for the waste pickers. It has set up facilities within the landfill such as a nursing centre, a literacy centre and a credit and savings cooperative. It has 800 members among the 1 200 waste pickers on the landfill.

The main problem collectors face is the closing of the landfill. For environmental, health and economic reason, the Senegalese government decided to shut it down in 2002. The association has fought back and managed to delay it, but the threat of closure in August 2011 hangs over them.

The Book Diomm members chose Aliou to go to India in early June 2011 to learn more about how Indian waste pickers deal with landfill closures. He took part in a workshop where he heard about their struggles and victories.

What really impressed Aliou is that the Indians are organised and work together, “This way they are stronger and can fight for their rights” he emphasised. After the two day workshop in Mumbai, he visited the cities of Pune and Delhi and met with collectors to see how they work and to visit installations. He saw landfills, sorting areas, composting and biogas plants and scrap shops.

A few days after he returned to Sénégal, Aliou reported to Bokk Diomm members on his trip and what he had learnt. He explained that the Indian waste pickers are organised into associations all over the country, which is helpful as it makes it easier to share experiences and ideas. “India is amazing” he exclaimed and he found the waste pickers’ organisations “very inspiring”.

He also told people about his visits and differences from Senegal. For instance, door-to-door collection does not exist in Sénégal, and it that it may be a good opportunity for reclaimers when the Mbeubeuss landfill closes. In Pune they are organised into the SWaCH cooperative, and each worker collects from 250 houses to pick up segregated waste every day. They sell the good material and use the wet waste in composting or in biogas plants.

When Aliou returned from India he went with other members of Bokk Diom to meet with the authorities and companies about the closure of the landfill. Their aim was to discuss alternatives and compensation for waste pickers losing their livelihoods.

The authorities are offering educational programmes for children under 16, pensions for waste pickers over 55, and work in the recycling centre for 350 workers. Unfortunately, this leaves 350 jobless, and “this is a big issue for us” declared Aliou.

He has visited the soon-to-be recycling centre, in which none of the promised facilities like a restaurant, housing and health centre have been built yet.

Aliou told the authorities about the composting and biogas plants he saw in India and suggested this could be integrated into the recycling centre and create more jobs. He explained how the biogas plant turns the wet waste into gas and electricity energy while the compost could be useful for the recycling centre itself. “They were interested by these ideas, and we might meet again soon,” explained Aliou.

Solidarity and exchanges between waste pickers in different parts of the world can help to generate new ideas to improve the situation of waste pickers confronting similar problems.