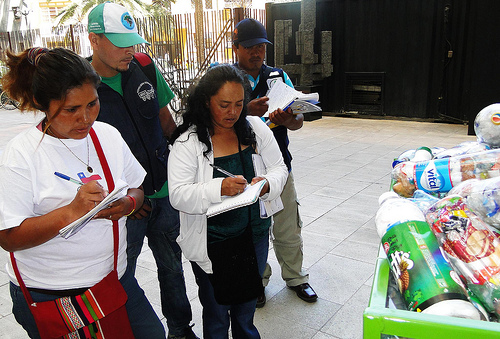 Global Waste Pickers’ Day is celebrated on March 1 in memory of the massacre in Colombia in which 11 workers were brutally killed. For the past 20 years since this tragic event, waste pickers/recyclers have continued fighting for recognition of their work.

“There are no borders for those who fight,” is the slogan that symbolizes the struggle of the more than 15 million people who make a living from recycling in the world – that is, close to one percent of humanity (according to the World Bank). It is with this slogan and the organization of waste pickers in mind that we celebrate the Global Waste Pickers’ Day.

Given the informal nature of this work, it’s not possible to rely on exact figures of the number of women and men who work as waste pickers. However, there are cooperatives and associations that have joined forces on the local as well as national levels to help bring more visibility to the waste picking profession. During the last General Assembly of Latin American Waste Pickers, which took place this year in Nicaragua, it was decided that a waste picker is defined as “a worker who deals in recovery, collection, transport, sorting, benefits, pre-transformation and commercialization of recyclable and reusable materials; and that makes a living this way without exploiting anyone.”

This is why on Global Waste Pickers’ Day we strongly promote the recognition of the waste picking profession and the right to continue in this line of work, as well as the right to public policies to improve our livelihoods.

In our contintent many waste pickers are involved in the Latin American and Caribbean Network of Waste Pickers (Red Lacre) – a movement that includes representation from 18 countries. According to Exequiel Estay, the communications coordinator with Red Lacre, “the challenges right now on a global level center around the formal recognition on the part of governments, organizing against incineration projects and other false solutions for waste, and to fight against the expulsion of waste pickers from landfills and dumps, which are the workplaces of many compañeros.”

This network represents and involves workers’ movements that bring together waste pickers from Latin American countries. Our activities cover a range of demands, including labor forces, recognition by governments, access to workers’ benefits, and more specific demands, such as what occurred in Colombia when a public bid threatened to give the recycling business over to private companies, leaving the waste pickers of Bogotá without jobs.

Among the planned events are marches, demonstrations at embassies, press conferences, organized by the national waste pickers’ movements in Latin America and the Caribbean.

In Bogotá, Colombia, more than 6,000 recyclers will mobilize for the inclusion of Colombian waste pickers in waste management, pay for their public service to society, the repeal of Decree 456 of 2010 – which was against warehouses for recycling – as well as a transparent bidding process.

20 years since the massacre in Colombia

In March of 1992, in the Universidad Libre Seccional Barranquilla (Barranquilla University) in Colombia, 11 dead bodies were found.  The victims had been beaten and shot. All of the victims were informal waste pickers, and they had been murdered by university employees.

The waste pickers had been tricked by university employees to enter the building with the intent of recycling. Once inside, they were beaten and shot with the purpose of selling their bodies for research and organ trafficking. A survivor who pretended to be dead lived to tell the police about what had happened.

In memory of this massacre – and in reponse to poor working conditions that we struggle to improve, and to the hostility we face on many levels from society – we declare March 1 the Global Waste Pickers’ Day.