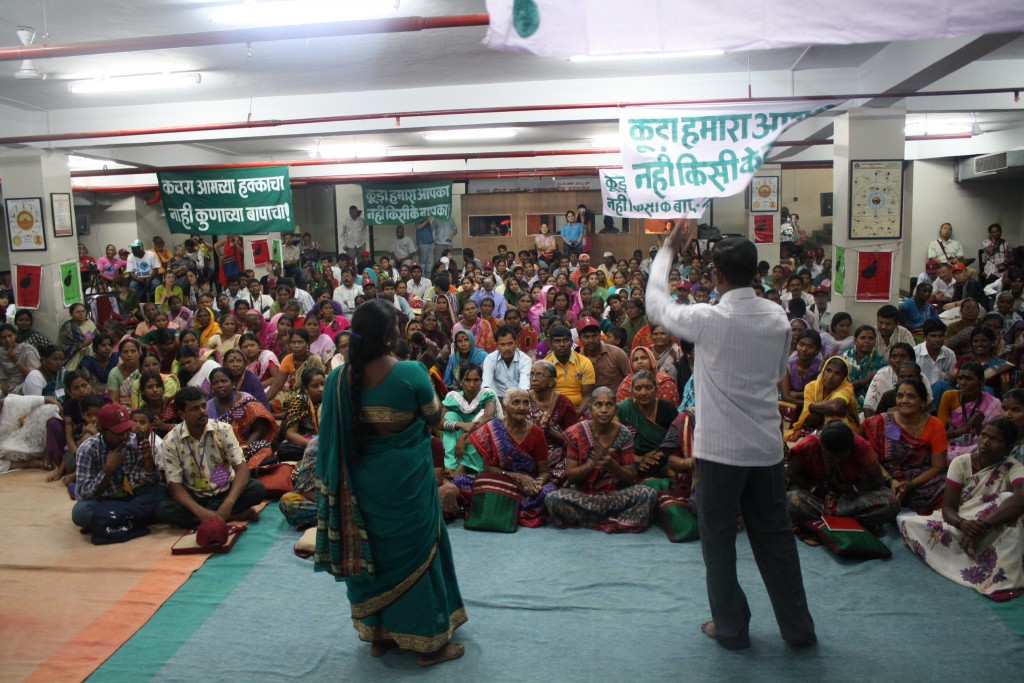 In the final day of the National Convention of Waste Pickers, waste pickers from India and across Asia spoke of their successes and challenges. This was the second national convention organized by the Alliance of Waste Pickers in collaboration with the Pune and Pimpri Chinchwad Municipal Corporations. It was held at the Yashwantrao Chavan Academy of Development Administration in Pune.

The convention was preceded by the Consultation of Urban Local Bodies on Integration of Waste pickers in Solid Waste Management on 24th April. Municipal officials from 17 municipalities participated in that event.

The waste pickers’ convention started in the morning with a song by veteran labour leader of informal workers, Dr Baba Adhav. This was followed by a presentation by waste pickers on the situations they face in their cities.

In Pune, the SWaCH cooperative model, in which waste pickers have gained local government support and improved working conditions, is seen as an example of integration around the world.

“The work we do is a service to society and this work has been recognized in Pune,” said a member of a waste pickers’ association in Ahmedabad. “We want all cities and governments to provide the same recognition for our work.”

A waste picker from Manila, Philippines, said, “When I go back home, I will bring the lessons I learned here in Pune and share them with my organization.”

There were also delegates from Indonesia, Bangladesh, China , the Philippines, Nepal, Vietnam, and Cambodia. Despite geographical differences, the waste pickers expressed a number of concerns in common.

Landfill closure on account of privatisation was a concern that came from delegates in many cities. Waste collectors from Delhi spoke about the problem of the waste to energy plant in Delhi that is being constructed despite public resistance. It has impacted their livelihoods and they were concerned about how they would earn a living once the plant becomes operational.

While delegates from Nagpur shared how they were already facing destitution on account of waste processing by Hanjer Biotech at the Nagpur landfill wheras those  from Mumbai said that about 10000-15000 waste pickers had been displaced at the Deonar landfill. Left with little choice they had turned to making bead jewelery. They complained that it did not pay as much as collection of recyclables. Waste pickers from SEWA had started making paper folders after they lost the contract for doorstep collection of waste.

Contracting out of waste collection through contractors was another discontent that simmered among the delegates. Waste collection has been contracted out in Delhi, Beed, Surat, Ahmedabad, Aurangabad and Sangli. Waste pickers are not integrated into those systems. As a result of which they do not have any access to waste. Sometimes in places like Delhi, they have to pay the contracted workers so that they are permitted to salvage recyclables from the truck.

One woman waste picker from Kanpur took a stand against corporate recycling. “We have to fight against privatization in Kanpur,” she said.

Many municipalities are reluctant to issue identity cards to waste pickers despite guidelines issued by the Ministry of Urban Development, Government of India in 2010. Delegates from Ujjain, Bhopal, Indore regretted that their city had not given Identity cards till now.

In sharp contrast,  a delegate from Bangalore talked about how an organization helped them receive identity cards. The Bangalore Municipality called a meeting and organised a survey and handed out I cards.

A delegate from Chennai said how she has to do multiple activities to make ends meet. “Living is so expensive” she said. “The rent has to be paid, rice is so expensive, vegetables and meat are quite unaffordable. I will go back and tell people in Madras that there are so many people in the world who collect waste and I met them.”

Fusheng from China said city development leads to frequent displacement of recycling markets and that causes some difficulty and instability. This is similar to the situation in Delhi where recycling markets are periodically shifted out of the city on grounds of causing pollution and nuisance.

Waste pickers also shared stories of improvements achieved after years of struggle and organizing.  Some Indian waste pickers shared that police harassment has reduced since they became organized, while others have been able to access ID cards and health insurance through their organizations.

The Surat Rag Pickers’ Association started in 1997 with ten women working together in a slum. The number has grown to 130. Today, they work regular hours, have eliminated the middlemen, and they even give bonuses.

Many delegates appreciated what had been accomplished in Pune and Pimpri Chinchwad and said they wished that their municipalities would exhibit the same concern and cooperation. They did comment that waste pickers in Pune and the rest of the country had no social security.

The waste picker delegates visting Pune were able to make field visits yesterday to several biogas and composting projects in the city, at which several KKPKP members work. The representative from the Philippines who belongs to a 400-member waste picker cooperative who has been working as a waste pickers since 1972 expressed concern that composting has not been happening in Manila, and biogas was a new concept to him. “When I get home to the Philippines, I will try to study this,” he said.

The meeting wrapped up with a declaration by the Alliance of Indian Waste Pickers to take a strong stand to get children out of waste work.

“We should never take our small children to work. They should go to school and learn,” said Rebecca from SWaCH.

In Pune, KKPKP has succeeded in getting this message out, and the number of children working in waste has decreased greatly. KKPKP has been working to help families overcome the challenges sending children to school presents, including making sure children have birth certificates and speaking to school authorities when children are treated badly by other students or by teachers.  It was agreed that a national campaign to get children out of work and into school would be undertaken in India.

The gathering also resolved that that the government should provide for pension for aging unorganised workers. The Indian delegates resolved to participate in the Pension Parishad scheduled to be held in Delhi from 7-11 May 2012.

The convention was followed by a performance of Beti Aayi Hai by Stree Mukti Sanghatna Mumbai. The play was a huge hit and much mirth and laughter ensued when the punch lines were said. It meant a lot because three fourths of the audience consisted of women.

The concluding activities included a puppet show in which Sugandhabai, the SWaCH mascot “trains” SWaCH members in citizen outreach. Afterwards, Taal Inc led a drum circle using drums made from waste materials, as well as other cultural activities.

The National Convention will be followed tomorrow by the first ever Global Strategic Workshop of waste pickers. At that event, which runs from April 27-30, waste pickers from dozens of countries in Africa, Latin America and Asia will convene to discuss inclusive models of integrated solid waste management, sharing strategies and ideas as well as the threats and challenges they are facing. The countries represented include Serbia, Brazil, Paraguay, Uruguay, Chile, Madagascar, Colombia, Ecuador, Argentina, South Africa, and Senegal.

Waste pickers and organizers with the Global Alliance of Waste Pickers will be available for interviews.

For further information about the National Convention of Waste Pickers, contact: