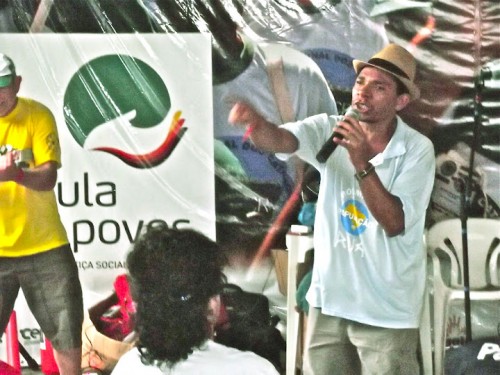 At a panel organized by the National Movement of Waste Pickers in Brazil, several speakers from different social movements and organizations spoke about the removal of street vendors, homeless populations, and waste pickers that has been happening with increasing frequency as Brazil develops and takes on mega-events such as the World Cup and the Olympics. The panel was called, “Resisting the Hygienization of Urban Centers.”

Maíra Vannuchi, with StreetNet, talked about a mapping project that the organization conducted to find out how many street vendors there were in the city. She made the connection between street vendors and waste pickers. “For the StreetNet movement, the Brazilian movement is a great inspiration. Every time I talk to street vendors, I talk about you waste pickers.” Street vendors are increasingly facing expulsion from urban centers. Waste pickers face similar issues. 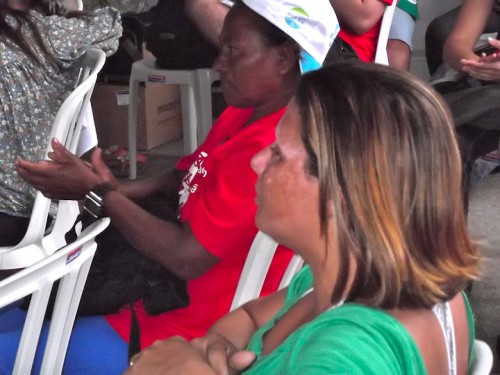 Tank Menezes, with the National Movement of Waste Pickers in Brazil, provided some devastating examples from his own city. In Porto Alegre, there were 800 families living downtown, surviving as waste pickers. The city government evicted them and relocated them somewhere else. “The officials talk about how the new apartments are so pretty, but the fact is now everyone is out of work,” he said. “It didn’t bring any dignity because the community was taken from their place of work.” He talked about how a mechanized recycling system was introduced in their place. There are 300 waste pickers working for this recycling project where there were nearly 2,000 before.

“It’s an extremely violent repression without any negotiation,” said Vannuchi, with StreetNet. “To make this World Cup, they have to remove the poor. They don’t talk with the communities or social movements. In this process of urban removal, everyone is affected.” Vannuchi said in South Africa and also in India, during the Commonwealth Games, large populations of urban poor were evicted.

“This global perspective is extremely important to know,” said Seu Carlos Alencastro, with the  Brazilian movement. “Working together we can have the strength to fight this problem. Today many people talk about urban reform. We can’t talk about this anymore without getting involved and finding a solution,” he said.

Tião Rocha, an audience member, said, “I think Rio+20 starts and ends with this issue. Human rights were never respected in this country. Twenty-four years of dictatorship ruined this country. Higienization is the opposite of humanity.”

“They are treating street populations as if they were trash,” said Maria do Carmo Santos, from Street Vendors United Movement (MUCA). “We have no health care, no education, and we are forced off the streets. We are only allowed into the city to wash rich women’s underwear. We have no place in the city,” she said.