This information was compiled from the Alliance of Indian Waste Pickers newsletters from May and August 2012: 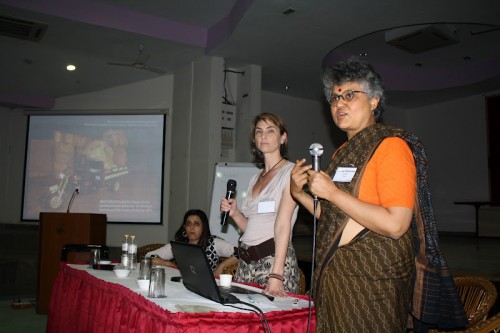 Poornima Chikarmane, with AIW, speaks at the ULB event.

Organized by the Alliance of Indian Waste Pickers, this consultation aimed to promote and showcase effective and inclusive models of solid waste management and to encourage urban local bodies to adopt these. Representatives from 17 Indian local governments, as well as government representatives and urban local bodies from Indonesia and Nepal took part. Participants discussed local initiatives in solid waste management, and policies that integrate waste pickers. The consultation included a visit to local municipalities to see the work of SWaCH in practice.

2nd National Convention of the Alliance of Indian Waste Pickers 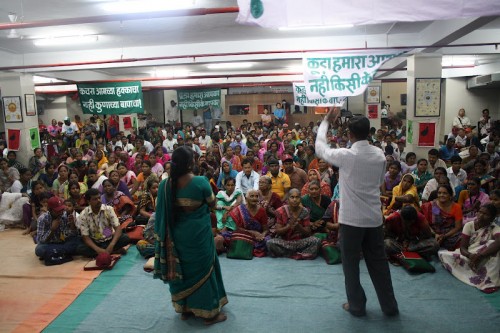 Waste pickers from across India and from around the world participate in the National Convention. (credit: Alex Cardoso)

About 300 waste pickers from 20 cities, representing 29 organizations, participated. They were joined by local waste pickers from Pune as well as waste picker delegates from more than 20 countries who had arrived in Pune for the Global Strategic Workshop. Some of the key issues that emerged from the convention included privatization, incineration, and difficulty in getting citizens to pay monthly fees, as in many cities, waste collection is seen as a caste-based duty and not a professional service. AIW discussed plans for the next year, which include campaigns against child labor, waste picker registration, and pensions.

Pune, Delhi and Bangalore, India, throughout 2012 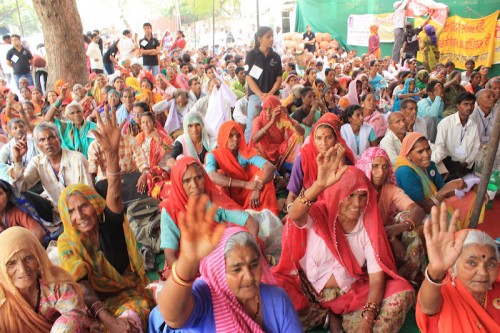 Since earlier this year, the informal workers in India has been coming together to voice demand for pensions. Much of India’s growth comes from the informal economy. They need to be compensated when they can no longer earn. The Pension Parishad, held in Pune, India, in February, was attended by waste pickers, rickshaw drivers, domestic workers, construction workers and other workers in the informal sector. Then, May 7-11, 3,000 working poor – mostly elderly – from all across India came together in Delhi to demand pension rights. Public hearings were held as well as discussions on vulnerable groups who lack support such as tribal groups, sex workers, the transgender community, HIV positive people. 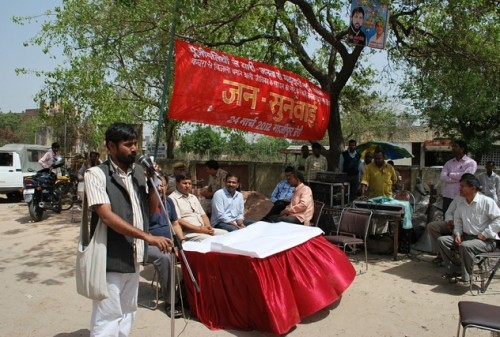 All India Kabari Mazdoor Mahasangh at the protest against the Ghazipur incinerator. Credit: AIKMM

The Ghazipur Anti-Incinerator Committee (GAIC) organized a citizens’ hearing on the waste-to-energy incinerator being built at Ghazipur, a thickly populated area near New Delhi. Led by local residents and waste pickers, more than 300 people gathered to demand an immediate stop to the ongoing work on the incinerator. Another protest took place on Aug. 29. Participants began at Raj Ghat and marched to the Delhi Secretariat.

Children should be in school, not on the streets picking waste, no matter how dire the family’s situation. This has been the stand that the Kagad Kach Patra Kashtakari Panchayat (KKPKP) has taken since its inception in 1995 when a survey had revealed that the number of child waste pickers in Pune was high and that more than half had waste picker parents who were members, or potential members, of KKPKP. KKPKP hopes to work with the government bodies to implement existing legislation and to use the allotted funds to provide the required support and monitoring to ensure that children remain in school and not on the streets. Ultimately, there has to be a move away from the current tendency to ‘punish the offenders’ without tackling the contributory factors. On April 23, the eve of Anti-Child Labor Day, KKPKP hosted an event that launches a renewed campaign against child labor. At the event, 460 members’ high school aged children received scholarships.

Brussels, Belgium and Spain
May 2012 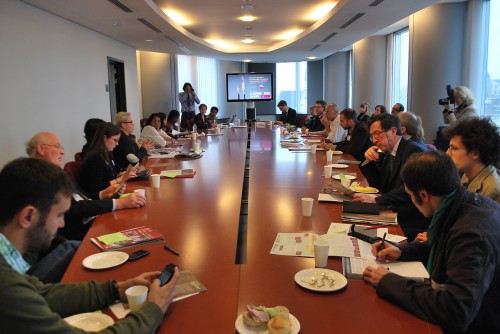 Two important international meetings with policy implications for Indian waste pickers were held in May 2012. Representatives of SWaCH, the Pune Municipal Corporation, and the Global Alliance for Incinerator Alternatives (GAIA) presented the viewpoints of Indian waste pickers at the Congress of Zero Waste in Spain, and at the release of the EU Double Standards Report at the European Parliament in Brussels. The delegates made a strong case for less capital-intensive, more people-centred waste management models, with a stronger emphasis on recycling rather than incineration.

The talk on ‘double standards’ at the European Parliament in Brussels aimed at appealing to the Members of the Parliament to urge member states to stop buying carbon credits generated from Clean Development Mechanism (CDM)-sponsored waste incinerators and landfill gas projects in India and China. These projects adversely impact the environment and waste picker livelihoods, yet they are being given unwarranted subsidies under the guise of emission reductions. 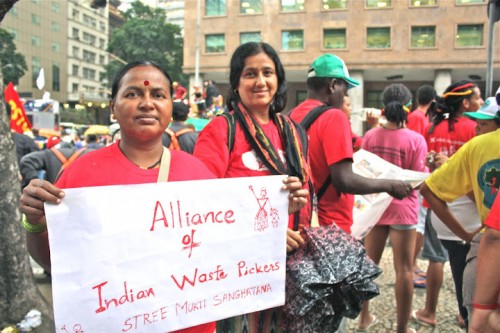 Sushila Sable, Kalpana Andhare and Jyoti Mhapsekar represented the Alliance of Indian Waste Pickers (AIW) at Rio + 20, the Earth Conference, in June 2012 at Rio De Janeiro in Brazil. This conference focused on people’s perspectives on environment protection, in the context of economic prosperity and inclusion/exclusion of marginalized people. Read the rest of Jyoti’s article about the Alliance of Indian Waste Pickers’ experience at Rio+20 and the People’s Summit.

Other updates from India include KKPKP and SWACH’s involvement in the Right to Education Act (RTE), which guarantees free and compulsory education. Also, read about V-Collect Clothes, an effort that helps to give the urban poor access to good, wearable clothes at a time when buying in retail stores is becoming more and more unaffordable.

Read about how Chintan ensured that no barriers were created for the informal sector which plays a significant role in the recycling of e-waste through itinerant waste pickers and e-waste handlers and how the organization aims to provide at least 100 green jobs in the first year, so that they can work as per the E-waste (Management and Handling) Rules 2011.

U-ID cards for waste pickers: The Indian government has taken an initiative to provide identification to all Indians, through U-ID cards. Safai Sena is helping its members to get these U-IDs since the lack of formal documents leads to waste pickers and kabaris being routinely harassed.