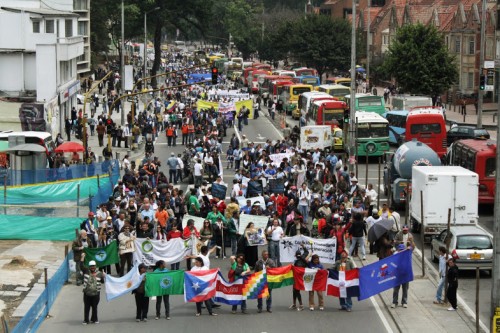 In the city of Bogotá, Colombia, waste pickers of the Recyclers’ Association of Bogota (ARB) have been organizing themselves for more than two decades. ARB is one of the oldest independent waste picker-run associations in the world. But the association and its 2,500 members are not being recognized by the current municipal government of Bogotá. Their livelihoods are threatened by the interests of big companies and members of the government who are trying to take over the profitable business of solid waste management.

In December of 2011, the waste pickers of Bogotá, under ARB, won a huge legal battle that would defend their rights to their livelihoods as waste pickers. But one year later, their hard-earned gains are under attack. The government body responsible for the city’s solid waste management, UAESP, is defying court orders. It has been creating false “recyclers’” organizations to compete with historical waste picker organizations as well as promoting negative and false statements against ARB.

All historical waste pickers from Bogotá, who for over a hundred years have been devoted to recycling, need our immediate support:

Share the link http://bit.ly/reciclajepararecicladores with your lists and friends, and spread the word!