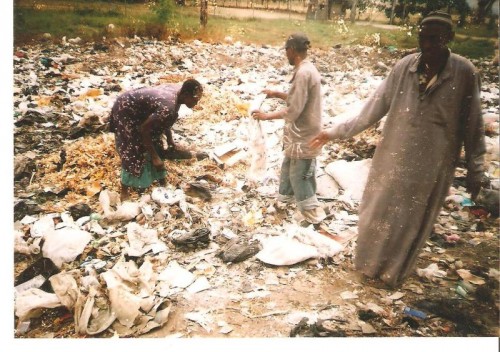 Waste pickers in Kenya are fighting to be heard.  It has been a slow process of building solid organisation but it is showing results.

In the towns of Nakuru, Mombasa, Kisumu and Nairobi many people view pickers as trouble makers, especially as gangs sometimes operate from dumps.  In fact the waste pickers are earning an honest living by collecting, sorting and selling metals such as aluminium, copper and iron as well as plastic bottles and containers, cloth, bones and organic waste.

Cloth, for example, is sold to people who make cushion covers and pillows while companies convert bones into animal feed and filters.  Glass bottles go to alcohol making industries and waste food is used for feeding chickens and pigs. So pickers make an important contribution to the local and national economy.

Through organising at each dump pickers began to take up welfare issues. Some self-help groups have started a savings scheme known as merry-go-round where each week they jointly contribute money and one picker gets the lump sum. Other groups have put aside small savings to help pickers when they get ill. This is important as the work can be dangerous as workers deal with chemicals and sharp objects and sometimes get injured and cannot work for a while.

This grassroots mobilising has now led to groups within cities coming together to consolidate waste picker voices. They have set up town associations which aim to engage municipalities, government departments and other stakeholders in the industry.

In building town associations Wiego has assisted groups with leadership training and in drawing up a constitution. People had little experience of building organisation so Wiego’s input has been useful. Also in the process of constitution making groups have learnt a great deal especially on how to operate democratically.

It took a while for pickers to trust Wiego as other people have offered help before and have come and gone. But Wiego’s approach is to empower pickers to organise themselves. Pickers were delighted when their constitutions were certified by government as such recognition allows them to fundraise and for people to view them in the way they would any other organisation.

In building organisation waste picker groups from the four different towns have come together.  It has been exciting for pickers to meet people from other areas who are dealing with the same issues. It also raises the real possibility of developing a national waste pickers’ alliance.

A national alliance combined with town associations will give pickers a strong voice. They are already growing in confidence as they do things for themselves. Up to now municipalities have not viewed waste pickers as workers or as a source of good environmental health even though they recycle waste and prevent the release of harmful greenhouse gases. But soon municipalities will not be able to ignore waste pickers and will have to seriously engage with this united voice.