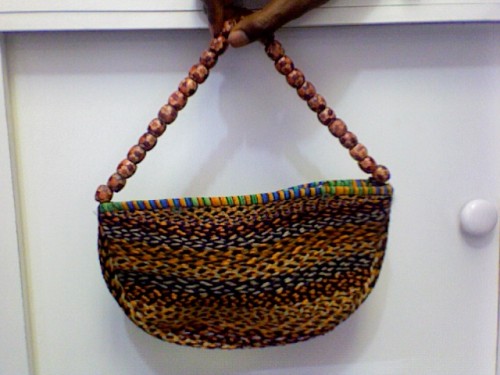 “These waste pickers from Kinshasa are very creative,” commented Wiego’s  (Women in Informal Employment Globalising & Organising) Kapita Tuwizana. “Being so poor has made them think in imaginative ways.” They collect garbage such as plastic, cardboard, metal like any other waste pickers but they also make new things from this waste and sell it.

With the plastic they make good floor tiles for houses. They use technology that melts the plastic at high temperatures and then shape it into tiles.  They also collect discarded hair extensions and make lovely handbags out of them.

Some waste pickers collect old metal car parts and melt these down and remould them into new parts. These are sold to mechanics. They also turn metal waste iron trollies that people use for carrying their goods around the city.

After a struggle men and women waste pickers managed to negotiate space from the municipality to sell their wares in a large market in the centre of Kinshasa. But although they are strong in their trade they are still weak organisationally.

With the help of a Kinshasa women’s NGO, LDFC (League for Women’s Rights in the Congo), Tuwizana managed to identify 12 local waste pickers’ associations. But these associations were not aware of each other. They met for the first time when he ran a four day strategic and network building workshop. Through meeting each other the waste pickers began to realise they had more power than they thought.

It was clear at the workshop that they were hungry to build their organisational strength and negotiate with municipalities. There are many issues they need to negotiate as government mainly ignores their valuable work.  Municipalities give contracts to private companies to collect waste in upmarket suburbs and in the commercial and industrial areas of Kinshasa while waste pickers collect rubbish in informal settlements.

There are no landfills in Kinshasa so pickers have to collect waste from the streets. They want to address this with municipalities and also be eligible for government waste contracts. But to approach government they need a strong voice and this is what they want to build.

It was exciting for waste pickers who attended the workshop to meet many other associations and to learn that a real possibility exists for them to negotiate with government.

Some of the local waste picker associations have a leadership structure and hold general assemblies while others are less organised. But they were all keen to discuss developing proper constitutions.

Another aim which emerged during the workshop was to recruit further associations and individual waste pickers in the city.  Kinshasa has a population of over 10 million people so many waste pickers still need to be recruited.  Once they are united they will draw up a constitution and form a provincial structure.

At the workshop there was a debate about whether to form sectoral provincial networks or to simply unite all waste pickers.  They decided in the interest of building their strength that all pickers need to unite. The workshop participants selected people to form a steering committee to start working on the constitution.

A big issue for these pickers is the question of social protection. They have no health care, sick or old age provision.  They are interested in setting up a cooperative where they can jointly contribute to some form of protection.

At present men waste pickers tend to dominate organisations but there are some strong and well educated women who are coming to the fore as leaders. One, for example, is a former nurse, who can make more money by waste picking. Waste pickers have a mixture of education and skills which should help them in building organisation.

Comments Tuwizana, “I can see they will build strong organisation. They have got the will. They just need a bit of assistance.”