Chintan Environmental Research & Action Group and Safai Sena just released a new documentary, Credits vs Carbon Credits. The film explores the effects of large projects vying for carbon credits on the livelihoods of waste pickers. It chronicles the journey of two waste workers from New Delhi: Aasma Bibi and Jai Prakash Choudhary aka Santu ji. Both of them are also activists with Safai Sena, an association of waste pickers, itinerant buyers and small waste dealers.

Asma Bibi is worried how a waste-to-energy project in her own backyard, in the Ghazipur landfill in Delhi, may put waste pickers like herself out of a job. Santu, pushed out of his small shop in Connaught Place by a large corporation, put forward the case of recyclers at the United Nation Climate Change conference in Copenhagen, in 2009. Concerned, they travel to Kanpur, Mumbai and Okhla in Delhi, to explore what impact the hunger for carbon credits and private handling of waste has had on recyclers like themselves. 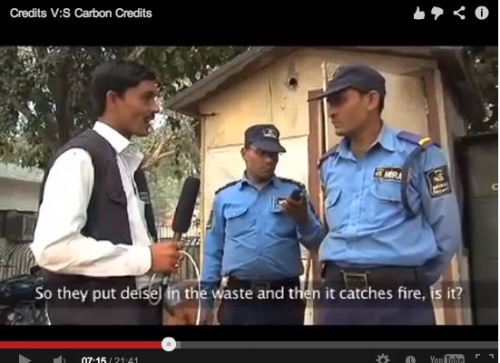