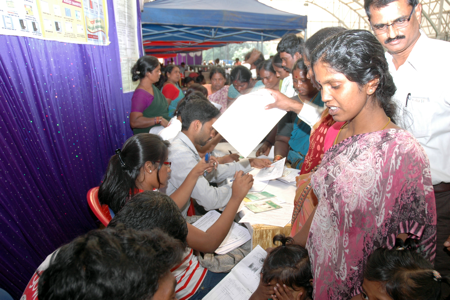 A unique day long Social Security Camp was organized for wastepickers in the city today. A little over 1000 people participated in the camp that included children and adults.

The camp was organized by BBMP in collaboration with Hasirudala, a member based organization of wastepickers in Bangalore city. The event was facilitated by the Dept. of Personnel and Administrative Reforms, Karnataka State Government.

About 100 families of wastepickers enrolled for Vajpayee Arogyashree, a Health Scheme for quality treatment of major ailments, requiring hospitalization and surgery, 90 people for Adhaar card and as many as 70 people received help in completing the forms for different pension schemes that will be submitted to Atal Janasnehi Kendra. Sixty new wastepickers were registered for receiving ID cards and few people opted for contributory pension offered by Labour department. In total over 500 people received help to access different social security schemes.

For more information contact Nalini Shekar at nalinipalyam1@gmail.com or 7829777737.