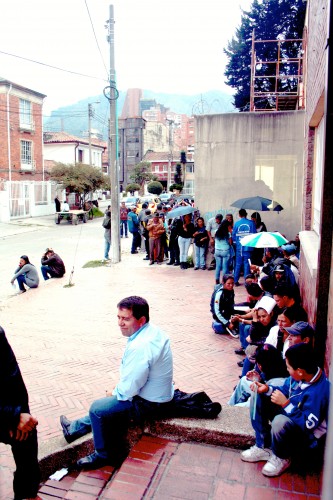 After over 20 years of fighting for recognition and inclusion in the city’s waste management system, the organized waste pickers of Bogota finally saw their dreams come true when the Bogotá government issued them in March of this year their first payment for the collection and transportation of recyclable materials. It was the first time they were paid as public service providers to the city.

This victory cannot be explained without looking back at the ongoing struggle of the Asociación de Recicladores de Bogotá (ARB) for waste pickers’ rights and livelihoods. Their strategies have included numerous legal claims, demonstrations, support from legal advocacy groups and communication campaigns to both prevent private firms from monopolizing waste management in the city and to be recognized as an integral part of that system.

The strategic decision to use the judiciary system has proven to be a successful means of reaching these goals. Since 2003, the Constitutional Court has issued various resolutions and orders recognizing waste pickers as subjects of special state protection. The Court has also acknowledged that to overcome poverty and waste pickers´ vulnerability, municipal authorities need to recognize and remunerate them as service providers in the collection and transportation of waste, and that attention should be given to the strengthening of their organizations and their entrepreneurial potential.

But despite these guidelines, until the end of 2011, the Bogotá government continued to opt for a welfare approach that was not helpful in the empowerment of the waste pickers. They continued to be excluded from the public waste management system. That’s why in 2011, the Bogotá court strongly intervened by issuing Order 275, providing municipal authorities with clear instructions to ensure that waste pickers would be included in the waste management system. In response to the court order, the current municipal government developed a transition model of inclusion, divided into two phases. The first phase is made up of the following five steps:

The process of inclusion is an ongoing one. To date, there are 14,400 waste pickers registered in the census. Further efforts need to be made to incorporate them into the banking sector, and to increase the number of official points to weight and register for the payment transfers. In addition, many waste pickers lack proper IDs. The District Capital Administration has begun to resolve this issue.

Phase 2 of the process will consist in the strengthening of existing waste pickers’ organizations and their entrepreneurial skills on one hand, and promoting the creation of new organizations on the other. An additional benefit of this process is that any waste picker in Colombia, living in poverty and vulnerable conditions and where there is a public or private waste management system, can now demand the same treatment that was granted to waste pickers in Bogota. This means that:

In Bogota, the Mayor´s Office launched a payment system for waste pickers in exchange for their services collecting and transporting recyclable materials.

An event kicking off the historic payments at city hall auditorium was held on March 21. Waste pickers´ leaders, independent waste pickers, city officials and the Mayor himself attended. There, the city government explained how waste pickers would receive payment for each tonne of collected and transported recyclables. With an automated teller machine in the middle of the auditorium, the mayor invited two waste pickers to demonstrate. Each one of them sent a text message with their mobile phones to the bank branch in charge of doing the transaction. Photo credit: Federico Parra.

After going through security protocols, each received a PIN to claim their payment in any teller machine. Once they introduced their PIN in the teller machine, they received their payment. People burst into applause, jubilant shouts and even tears. “No more speeches! No more announcements!”—They shouted. Photo credit: Federico Parra.

Many of them, still in shock, could not do anything other than repeat their thanks. However, the work that remains will be a challenge —the promise is to have all the 14,400 waste pickers in Bogota included into this system. The idea is also that in a few years waste pickers will be organized to provide collection and transportation services of recyclable materials, and that they will also receive (why not?) remuneration for the other environmental services they provide. Photo credit: Federico Parra.
Tweet
| Inclusive models | Tags: ANR, ARB, Bogota, Colombia, federico parra, recicladores, wiego
Comments Off on A time to celebrate! Dreams come true for the organized waste pickers of Bogotá
Comments RSS feed for this post.
Loading Comments...