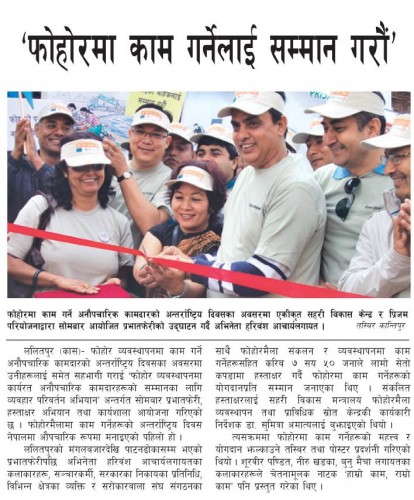 PRISM project organised a Behaviour Change Campaign (BCC) on 25 March 2013 with the objective of garnering respect and recognition for waste worker’s contributions to the solid waste management sector in Nepal, with a brand message, “Informal Waste Workers: Deserving respect for their contributions.”

It was a first of its kind BCC campaign targeting waste workers in Nepal and was a grand success, with the participation of about 750 people. The event was able to meet its objective by grabbing the attention of a huge number of people and media personnel. The programme was fully supported by Government of Nepal, the Delegation of European Union to Nepal, Solid Waste Management and Technical Support Centre (SWMTSC), Municipalities of Kathmandu Valley, distinguished guests from different sectors, non-state actors involved in Solid Waste Management and hundreds of informal waste workers. The informal waste workers participating in the event were excited and enthusiastic about the event and expressed that they were a part of such a programme for the first time in their lives.

The workshop included the following activities: