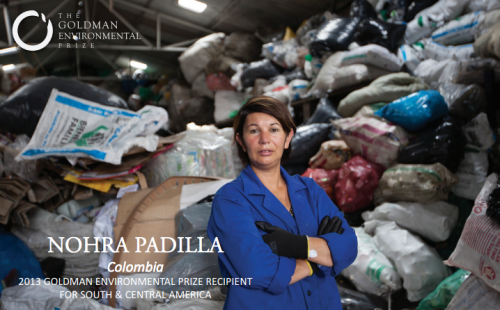 The Goldman Prize publication states, “Thanks to Padilla’s leadership, the cooperatives have grown into the Association of Recyclers of Bogotá (ARB), an organization that represents the city’s 3,000 informal recyclers, and the National Association of Recyclers in Colombia (ANR), with 12,000 members strong. Together, Padilla and the recyclers are revolutionizing the waste management infrastructure in Colombia. A landmark victory came in late 2011, when Padilla won a court ruling that now prohibits waste management contracts that don’t provide job opportunities for informal recyclers. It was a much-needed affirmation of their fundamental right to work and the government’s acknowledgment of the necessity and benefits of recycling. Recyclers are now formally recognized stakeholders in Bogotá’s waste management planning.” Read the full article

And Nohra Padilla’s acceptance speech (note: there is a mistake in the translation around 1:40 in which she says “15 million waste pickers around the world” but the translation incorrectly says “1.5 million”)