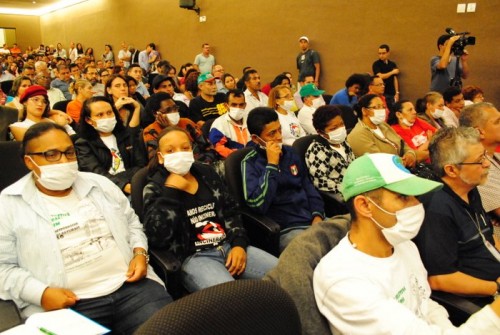 In Brazil, the fight against incineration continues. In São Bernardo do Campo, waste pickers attended public debate about waste to energy between the municipal government and the Anti-Incineration Coalition held at a Methodist church in the city. São Bernardo plans to install an incinerator that will burn waste in surrounding cities for a period of at least 30 years.

In a powerful symbol of protest to show the health impacts of incineration, a group of 30 waste pickers wore surgical masks during the debate. 150 waste pickers and residents of the former Alvarenga dump (the planned site of the incinerator) were barred from entering the church, with the explanation that there was no more room. In an act of protest, Maria Mônica da Silva, a waste picker and leader based in the neighboring city of Diadema, demanded the final words. She shamed the organizers for their lack of respect for the waste pickers who were left out of the debate.

“…The 150 people who were left out and were not provided with information will be the first people to feel the impact of the incinerator, as they are residents of Jardim Alvarenga, the place where the incinerator will be built,” she said. “We demand respect.”