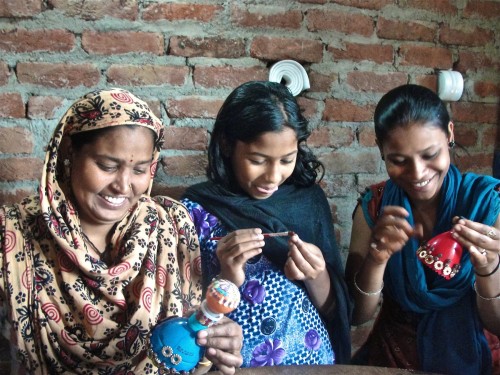 Situated on the northeastern outskirts of Delhi, Seemapuri is one of the longest standing communities of waste pickers. It is a tight knit community of mainly Muslims and some Dalits, a historically discriminated caste, from the Indian state of West Bengal. In that neighborhood, most of the community earns a living by collecting, sorting, and recycling from the surrounding neighborhoods. In March of this year, Kabad Se Jugad, a women’s cooperative that makes arts and crafts out of recyclable materials launched in the Seemapuri neighborhood.

In partnership with New York-based artist, Rolando Politi, also known as “Recycle and Pray”, these waste pickers are transforming these materials into objects and art, “relying on inspiration and creativity (in Hindi: jugad) to guide our production process” and “bringing our talent of improvising from waste to the wider world.”

One year ago, Rolando visited Delhi for the first time and met Shashi Pandit of All India Kabadi Mazdoor Mahasang (AIKMM) waste pickers’ union of Delhi as well as Federico Demaria, a doctoral student who was doing research on participatory waste management there at the time.  An artist of “waste transformations,” for many years, Rolando had been thinking for years about collaborating with waste pickers to transform consumer packaging waste into art. Shashi Pandit suggested the start up of an all women’s cooperative, with Seemapuri as its location. After a year of fundraising, the cooperative had enough funds to start in March.

The waste picker artisans in the cooperative make flowers from aluminum cans, plastic bottles, chai cups, newspapers and lightbulbs; garlands and bangles from bottle caps, among many other objects.  The group is still small, with six women and two men, but hopes to grow to absorb at least 17 members further down the line. Kabad Se Jugad has a shop and an office in the heart of the community. In this short time, Kabad Se Jugad has already become known and supported by the waste picking community of Seemapuri, said Rolando. Right now, the cooperative is still only testing and experimenting with creating objects for eventual sale. The cooperative plans to go to market by September.

“This is a truly original waste picker-run and designed for one of a kind originals. It is not an upcycle factory,” Rolando said. He added that the cooperative is “the very first of its kind for urban India, empowering women who had never before thought about or had the opportunity and the initiative to manifest their craftiness and creativity by adding value to the waste materials instead of only separating and creating weight for the next step in the recycling chain.”

The Kabad Se Jugad website has a lot of information and photos so check it out!

See the biography of Bahiran Bibi, one of Kabad Se Jugad’s members, and also a member of AIKMM

“Bindi bulbs”, one of the many creations of Kabad se Jugad. Photo credit: Rolando Politi.

Green plastic material that looks like leaves or flowers.