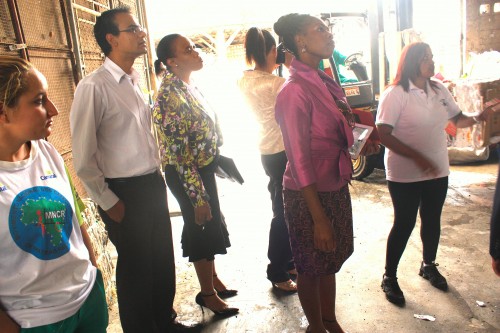 In the beginning of April of this year, officials from the South African Department of the Environment (chemical and waste management branches) were in Brazil and Colombia to learn about inclusive solid waste management. The delegates went straight to the heart of the the Brazilian movement, to its headquarters in São Paulo.

They continued on to Belo Horizonte, where they visited a cooperative and met with members of the Municipal Waste and Citizenship Forum. Their last stop in Brazil was Diadema, in the industrial belt of São Paulo, where they visited a cooperative, learned from waste pickers and city leaders about the city’s participatory waste management model, and also met with the mayor.

Their final stop in Latin America was Colombia, where they met with the Association of Recyclers of Colombia, whose court victory and long struggle has recently resulted in the recyclers being responsible city’s recycling collection and processing and receiving payment as service providers. The learning exchange was facilitated by Women in Informal Employment: Globalizing and Organizing (WIEGO). More coming soon about the Diadema visit!

At the Sala Verde, or Green Room, where the environment department of Diadema took the delegation first for a reception presentation about the workings of Diadema’s waste management program. Photo credit: WIEGO.

Group photo in front of the greenhouse in the city’s botanical garden. Photo credit: WIEGO.

CooperLimpa and the South African delegates at the cooperative. Photo credit: WIEGO.