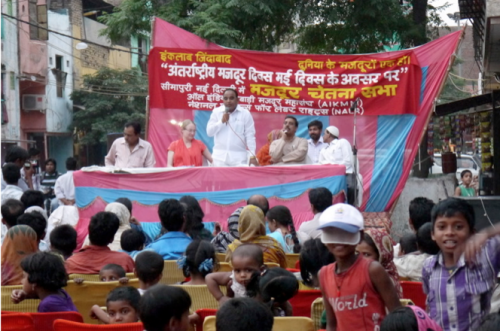 Text and photos provided by AIKMM

In recognition of International Labour Day, or May Day, AIKMM and its associate organization NALR hosted a program to promote solidarity amongst the waste collectors in northeast Delhi. While AIKMM has been working specifically on waste collectors’ issues since 2007, NALR works for informal labour rights, strengthening the voice and raising the concerns of workers in the labour force. NALR works to create pro-worker policies, safeguard workers’ interests in other policies, and improve the implementation of existing policies and schemes that benefit labour. Coming together for the annual May Day celebration, the joint program included waste collectors from communities in and around New Seemapuri who marked the occasion of Labour Day and gave voice to their demands for recognition and rights to continue their work. May Day offered a platform for building solidarity, which is absolutely crucial in the current period of increasing privatization and state control, which threatens the waste collectors’ livelihoods and ability to provide for their families.

New Seemapuri, where the Labour Day event was held, is a major center for waste workers in the National Capital Region (NCR) of Delhi. Around 20,000 people earn a living through various kinds of waste work in this community— from collecting to sorting, and selling up the recycling chain. As a result of their work, many neighborhoods are provided trash collection services and the city as a whole benefits from the promotion of recycling activities. The community has been engaged in this work for at least 2 generations, with most residents tracing their roots to West Bengal.

AIKMM has been concentrating its organizing work in this area for the last several years and has built up a strong base of support. Through AIKMM, workers have developed a platform for expressing the challenges of their work and demanding solutions from the government. AIKMM promotes an approach that builds solidarity amongst workers so that they can address the problems they face as workers and challenge policies that are not in their favor. At present, the main organizing issue is accessing waste in light of the expansion of municipal waste collection programs in east Delhi.

AIKMM has also recently partnered on a unique initiative to make flowers from waste, such as plastic bottles and aluminum cans. Kabad se Jugad is an all-women cooperative, which has been formed by a small group of women from the waste collector community. Currently, they are in a start-up phase, and the women are developing products, including beautiful and unusual flowers made from 100 percent freshly picked waste. Therefore, our motto is “cut to perfection”! By creating innovative objects from the waste, the women add more value to the goods than they would receive in the recycling market. In the next few months, the co-op will begin to sell its products. Look out for us in a funky painted Ambassador, which will be launched in Connaught Place in the upcoming months!

Labour Day (May Day, International Workers’ Day) is bound up with the struggle for the shorter workday–a demand of major political significance for the working class. This struggle was manifest almost from the beginning of the factory system in the United States, and International Workers’ Day is the commemoration of the 1886 Haymarket affair in Chicago. There, the police were trying to disperse a public assembly during a general strike for the eight-hour workday when an unidentified person threw a bomb at them. The police reacted by firing on the workers, killing dozens of demonstrators and several of their own officers. In 1889, the first congress of the Second International, meeting in Paris for the centennial of the French Revolution and the Exposition Universally, following a proposal by Raymond Lavigne, called for international demonstrations on the 1890 anniversary of the Chicago protests. May Day was formally recognized as an annual event at the International’s second congress in 1891.

Today, May Day becomes more relevant than ever because as following the opening of the Indian economy in early 1990s, Indian cities have been going through monumental changes, which have serious implications for the lives and livelihoods of working people. Although India has been experiencing GDP growth of 6-7 percent per year, poverty and inequality have risen significantly. The Government of India reports that 80 percent of the population lives on less than twenty rupees a day, even as the wealthy are becoming wealthier. Much of the growth under the current neoliberal regime has been jobless growth, and whatever jobs are being created are in the informal sector of the economy. Currently about 94 percent of the workforce is in the informal sector, working in hazardous conditions with absence of minimum wages, social security or health benefits.

Apart from the main labor force, a huge section of unorganized labor remains engaged in waste picking due to unemployment. Waste collectors are among the most marginalized amongst informal sector workers, and they live in the daily grind of poverty, ill-health, and harsh working conditions. Despite the fact that waste collectors recycle 20 percent of the city’s waste, saving the municipalities millions of rupees every year, they are unrecognized in legislation, criminalised by the administration and ignored by society. They sacrifice their own health and recycle resources that wealthier people recklessly consume, and yet they are made insecure because they have been refused the right to their livelihoods. This is despite the fact that, in the era of jobless growth and climate change, they have crafted viable green livelihoods for themselves; thereby contributing significantly to economy, society and the environment.

Mr. Veer Singh Dhinghan, MLA (Delhi Legislative Assembly), Member of the Welfare of SC/ST/OBCs Committee, spoke about his long-term commitment to the sanitation and waste workers in Delhi, which he has been working on since 1973. In his position as MLA and as General Secretary of the Municipal Sanitation Workers’ Union, Mr. Dhinghan has been a long-time staunch advocate for sanitation workers in Delhi.

Mr. Shashi Bhushan Pandit, Secretary (AIKMM) led the event and addressed the group on the significance of the May Day program.

Mr. Rajesh Upadhyay, Convener (NALR) opened the celebration by leading the group in singing songs about the workers’ struggle and highlighting the challenges of waste workers in Delhi since the arrival of private companies. He spoke on the history of May Day and how the struggle for workers’ rights continues since that time until today.

Ms. Dana Kornberg, PhD Student (University of Michigan, USA) spoke on the issue of international solidarity and the promotion of unity amongst workers to fight for their rights.

Mr. Ambrish Rai, National Convener (Right To Education Forum) highlighted the need for organization and unity in the workers struggle, especially in light of privatization, and alerted workers to their right to free education at any public school since through the government’s Right to Education (RTE) Bill.

Mr. Anjor Bhaskar, Researcher (Tata Institute of Social Sciences, Mumbai) riled up the crowd by leading the group in chants and spoke on the importance of workers’ solidarity and struggle.

Mr. Mitraranjan led the group in a revolutionary song and addressed the audience on waste workers’ issues.