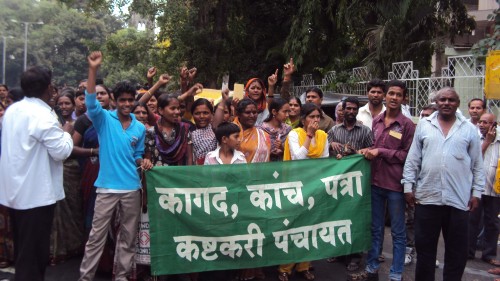 It was a decade-long struggle for something simple and fair: educational assistance for some of the poorest of the poor. Take Namrata. Her mother, a waste picker, always insisted that Namrata go to school. But it wasn’t easy. Things like school supplies didn’t come from back-to-school blow-outs. Namrata’s notebooks came from garbage that her mother picked through to earn a living.

Lack of access to education is one of the many struggles that waste pickers and their children have endured, coupled by the pressure to drop out of school for lack of financial resources. Even in municipal and government schools, parents have to spend on transport, uniforms, notebooks, text books, raincoats, school bags and other educational materials. While there has been a law in place since 1977 that designates educational support for the children of parents who perform “unclean” occupations, government officials have created barriers and made things difficult for waste pickers.

“Whenever we approach any ministry, they all agree in-principle that waste picking is an unclean activity. But nobody has bothered to categorise waste picking in the official list of unclean activities,” said Dipannita Sen Gupta of KKPKP, quoted in the Times of India. KKPKP is the trade union of 7,000 waste pickers in Pune and Pimpri Chinchwad. The program only specified the categories of scavengers, sweepers, tanners and flayers.

For a few years, pressure by activists and waste pickers to include their children in the program paid off. Between 2002 and 2005, the Ministry of Social Welfare awarded scholarships to a total of 1,360 children of waste pickers and scrap collectors in Pune, India, under the central government-funded scholarship program. Those few years of inclusion were thanks to the vigilant eye of Rahi, a Pune waste picker who discovered while sorting through trash about a decade ago that her son’s application to the scholarship program had been thrown out because – to her surprise – waste picking was somehow not considered an “unclean” occupation by the government. Rahi’s discovery sparked a campaign to pressure officials to include waste pickers in the program.

But in 2004, a state audit objection claimed that the program did not include waste pickers and so once again they were excluded. According to KKPKP, the scholarship was discontinued as the Central government took it over and did not recognize waste picking as an unclean activity. (For the categories included in the definition of “unclean occupation”, the central government provides 100 percent assistance to state governments to implement the program).

“Ten years is a school cycle which means that an entire generation of children has been denied this benefit,” read the June 28 KKPKP press release. “It is shocking that a Government that professed inclusion over the last decade preferred to let budgets lapse but refused to include children of waste pickers.”

But good news came in June. The children of waste pickers across India will now be eligible for the scholarship program. The program will be paid for by the Indian government. It will pay 1,850 rupees per year per child. It will be payable through a bank transfer, which activists say will prevent major problems. Previously, the money was transferred to the local social welfare department and “beneficiaries” would have to collect it from the office. This increased the possibility of theft by corrupt public officials if they were to get their hands on the money. About 6,000 children of the waste pickers from Pune and Pimpri-Chinchwad will be eligible for the scholarship.

The changes to the scholarship program came as a result of intense pressure from activists and union members who had been lobbying high level officials as well as mobilizing on the local level for many years. On May 17th of this year, 400 members of KKPKP came together at the Collector’s office to bring attention to the exclusion of their children from the scholarship program.

In addition, KKPKP members sent postcards to the Ministry of Social Justice and Empowerment officials requesting that their children be included in the program in order for them to continue in school and receive a good education.

“When parents are doing everything possible to send their children to school, the government has to do as much to ensure support,” said labor organizer Dr. Baba Adhav. A delegation led by Dr. Adhav met with the District Collector to discuss the issue with him. The delegation also consisted of Mohan Nanavre, president of KKPKP; Poornima Chikarmane, professor at SNDT University, as well as KKPKP members.  The program concluded with members taking an oath to keep their children in school whatever the circumstances and also to put an end to child labor within the waste picking sector.

How the struggle started: Rahi’s Discovery

Rahi Sugriv Ingle has an air of quiet dignity. Moderate voice and reasoned arguments are her hallmark. They hide steely determination. In 2002 her son, Hanumant, was studying in a municipal school in the area where she used to pick waste. One day his teacher asked the children whose parents worked in unclean occupations to identify themselves. Her son was among those raised his hand. When they did, she told them they would get a scholarship under some government scheme. The son came home with an application form saying the teacher had asked him to submit it. Rahi is a conscientious parent who believes that her child should get a good education. She had someone fill out the form. She put together all the documents required and handed them to her son to submit to his teacher. He did so the next day.

The following day she was at the municipal container near the school, rummaging through it as usual. She was diligently taking out plastic and paper and metal scraps and dropping them into her sack alongside the bin. The school cleaner came by, carrying buckets of waste paper. She chatted with him desultorily for a bit about this and that, as was her habit. She then started going through what he had brought to dump into the garbage container. Her keen eye spotted a familiar looking document that had been crushed. She pulled it out and straightened it out with trembling fingers. She started seething. It was the completed application for that her son had submitted the day before.

She marched off to the teacher to ask for an explanation. The teacher nonchalantly told her that she had made a mistake. The scheme was only for those in unclean occupations. Rahi was aghast. “Are you trying to tell me that the work I do is clean?” she asked the teacher in even tones. The teacher was unconcerned. She said the form referred to scavengers, tanners etc but the word ragpickers was not in it. The teacher did not budge.

Rahi brought the form to the union office and related the whole story. What followed were a series of representations to officials at various levels. A recommendatory letter issued by the Municipal Commissioner was attached to almost 800 applications of children of waste pickers. Until 2006 almost a thousand children benefited each year from the scheme. But then, the government starting using the same argument as Hanumant’s teacher more than a decade ago.

After the government’s approach to the policy changed, Rahi stepped up to the battle again with the same argument she had once used to challenge it: are you trying to tell us that children of rag pickers do not qualify because rag picking is clean?

Waste pickers and allies rally for the inclusion of waste pickers’ children in the “unclean” professions scholarship.