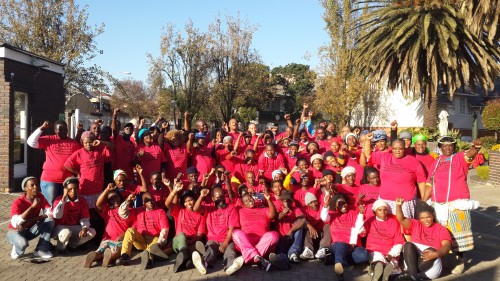 From June 19th to the 21st, the South African Waste Pickers Association (SAWPA) held its national meeting in Johannesburg at the Elijah Barayi Memorial Training Center. 80 landfill coordinators from across the country attended. There were seven waste picker leaders from different provinces. Facilitators from three organizations were there to help out.

The aim of the meeting was to:

Mooi River is leading the pack. The Mooi River project has formally started and we are waiting for the formal launch. Pitermaritzburg MRF (materials recycling facility) will start construction in September 2013. Tshwane project has got funding from the Department of Trade and Industry (DTI) and they have bought a truck, scales and bailing machine. Sasolburg project has won an International labour Organisational (ILO) award and 275K to buy a truck for the project. Eastern Cape Amathole District already has an MRF that was built by Buyisa eBag and it is managed by a cooperative of waste pickers.

So far we have 13 registered cooperatives including the ones that operate in the projects mentioned above. There is progress as compared to mid 2000s. Since we came to work with waste pickers, the conditions are slowly changing for the better.

The Packaging Council of South Africa (PACSA) reported back on the Sasolburg project, one that stemmed from a visit to Brazil and involves 3,000 households. Operations will start before end of the year.

The Department of Trade and Industry (DTI) has millions of rands for cooperatives and there is a criteria to be followed to get funding from them. In fact, the waste pickers’ cooperatives do qualify for the DTI funding. One of the SAWPA cooperatives has benefitted from this funding.

SAWPA has been facing the challenge of not being strong enough on the ground in some parts of the country, therefore we declared 2012-2013 a year of organising. The organising tool that was translated to four different languages was given to coordinators, who are expected to take it back to their constituencies.

The Constitution was discussed in much detail during this meeting. I have confidence that all the coordinators understand the contents of the constitution and that it is going to be easy when they discuss this on the ground. In its current form, the Constitution is not ready as a text. Hopefully the final constitution will be adopted in the next national meeting.

Coordinators were asked to come with the names of the people that they represent with an aim of starting a database of waste pickers. The names were accompanied by copies of the cooperatives’ certificates. The objective is to develop a database which will be used by SAWPA when it becomes independent. Musa Chamane explained the importance of this: the most frequent question that government and interested parties ask him and other organizers is, “where are the waste pickers and how many are there?”

Related to this issue is one also deserving of attention. Since the election of 2011 leadership to the association, some representatives could no longer be located. At the meeting, one SAWPA member made an urgent appeal to contact GroundWork in the case of losing or changing contact details.