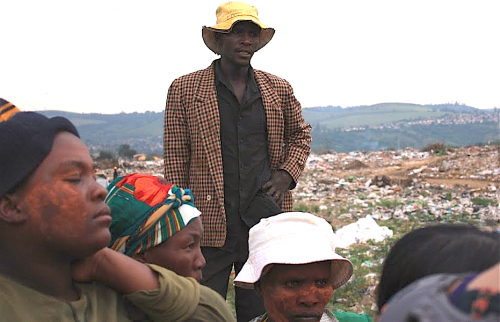 On May 15 and 16, 2013 over 400 people attended the Joburg Waste Summit, hosted by the Johannesburg Council and its waste management company Pikitup. 1.3 million tonnes of waste is disposed in Johannesburg every year, and the current landfills will be full by 2020. The Council and Pikitup urgently need to find ways to minimize waste going to landfill, and the Summit was called to explore how to do this. Current targets include reducing waste to landfill by 20 percent through recycling initiatives and by 30 percent through waste-to-energy projects. Although some programmes and pilots are in place, the Council and Pikitup are still developing detailed plans, so there is a possibility to affect how they move forward.

The first day of the Summit was devoted to recycling initiatives. Pikitup described the separation at source project that is being rolled out across the city. In the inner city Pikitup has partnered with a cooperative of street waste pickers. But it is considering contracting large private companies to collect recyclables in wealthy areas. Melanie Samson from WIEGO commended Pikitup and the Council for recognizing the contribution that waste pickers already make to recycling in the city and for beginning to work with street waste pickers. But she cautioned that the separation at source programmes are already negatively affecting waste pickers working on landfills, as they are receiving fewer materials to recycle. She argued that landfill reclaimers need to be included in all discussions and new recycling initiatives. Their livelihoods should be strengthened, not undermined, and if not all can be included in new programmes then they need to receive compensation. Melanie gave examples from India, Brazil and Colombia to show how recycling programmes can be designed to build on existing informal systems, pay waste pickers for the service they provide, and improve working conditions, pay and security for waste pickers. She emphasized that the Council and Pikitup need to support the strengthening of waste picker organizations in the city and develop ongoing participatory processes to oversee waste management policy.

As the Council and Pikitup had not invited waste pickers to speak at the Summit, Melanie shared the platform with Simon Mbata from the South African Waste Pickers Association and Sam Matsela from Joburg Reclaimers. Sam thanked the city for working with the street waste pickers. But Simon told the Summit that it was unacceptable that reclaimers were invited only to listen to others talk about their livelihood and called on Pikitup to work more closely with waste pickers. He also criticized the city for pursuing waste to energy as a way to minimize waste, and explained how it damages the environment as well as waste pickers’ livelihoods.

Waste-to-energy was the focus of the second day of the Summit. The Council has granted a tender for methane gas extraction on its landfills to Ener-G Systems. This project was registered with the Clean Development Mechanism in November 2012. Plants have been set up at two of the city’s landfills. But since the crash in the carbon market Ener-G cannot raise sufficient funds to start producing electricity. David Cornish from Energ-G Systems told Summit delegates that the company is now arguing that waste should be seen as a renewable resource so that it can access national government funding to promote renewable energy in order to make its project viable. But seeing waste as a renewable source of energy locks us into continuing to produce large amounts of waste and bury it in landfills. As Simon explained, this is a threat to both waste pickers and the environment.

Waste pickers in Johannesburg are beginning to organize at a city-wide level. They will need to take up the fight against waste to energy projects and to promote inclusive recycling systems that benefit and support all waste pickers in the city.

Waste pickers walking towards home at the end of a workday at Marionhill landfill. Photo: Deia de Brito.