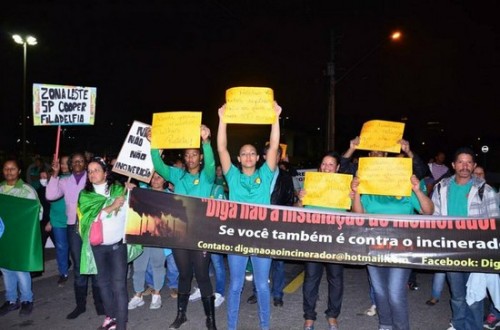 This is a translation and summary of an article in Portuguese

Waste pickers and residents of a neighborhood in Barueri, São Paulo, marched against the city’s proposal to build a waste incinerator. They marched to the municipal government building where a forum on solid waste management solutions was in action. Present at the forum was a representative of FOXX URE, the company that will run the incinerator. Protestors booed he and municipal leaders that support the plan.

The government of Barueri plans on burning 97 percent of its waste and recycling only 3 percent, as well as burning waste from nearby cities. The proposal runs against the National Waste Policy, which gives priority to reducing and recycling with social inclusion, as well as federal and UN environmental policies. Residents have already gathered more than 2,000 signatures against the construction of the incinerator and have distributed information to neighbors explaining the environmental and health damage caused by incinerators.