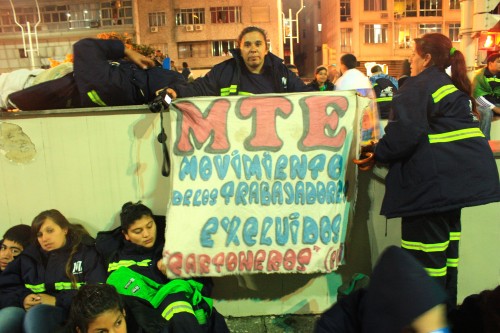 It was a Saturday night in July on a main strip near Copacabana beach. Nightlife there is normally vibrant but this night was beyond anything that part of the city had ever experienced – and of a different nature. On this night the streets were packed with three million Catholics from around the world. World Youth Day is a week-long event organized by the Catholic Church that happens every two or three years in different cities around the world. Its focal points are the gathering of Catholic youth from around the world and the public appearance of the Pope. This year it was held in Rio de Janeiro between July 23 and 28, when 3.2 million people were in the city for the event.

The tired pilgrims sung hymns in their native tongues and huddled together in prayer holding candles. They paraded the streets waving flags from their countries, banners from churches or organizations, and lugged backpacks, pillows, coolers, and camping gear. At the end of the night, hundreds of thousands would be camping out along the beach. Almost all of the pilgrims were young people. Their final gathering on the boardwalk and on the sand for the final mass was one of the largest concentrations of people ever gathered in this stretch of Rio de Janeiro.

The majority of the World Youth Week participants had religious affiliations but others were part of organizations or social movements. One of these groups was the Argentinian Movement of Excluded Workers (Movimiento de Trabajadores Excluidos). The MTE is a waste pickers’ cooperative that is responsible for recycling in Buenos Aires, and its members recycle 225 tons of materials per day.  The waste pickers of Argentina call themselves “cartoneros.” The cartoneros of the MTE have coined the new pope the “Papa Cartonero.” Though criticized for his stance on issues such as those of gay rights and abortion, the newly elected Argentinian Pope Francis is considered more progressive than previous pontiffs on some social themes and more supportive of poor and marginalized populations.

In the weeks leading up to the international gathering, Pope Francis had asked its organizers to invite a delegation of youth waste pickers from the MTE to participate. Food and lodging would be paid for.  The new pope has a history with the MTE. He used to hold mass in Constitución, a poor neighborhood of Buenos Aires. That’s where MTE president Sergio Sánchez met him in 2008. Earlier this year, the Pope invited Sánchez to accompany him to the Vatican for his swearing in. The other waste pickers hadn’t had a chance to meet Pope Francis so they were very excited. They drove all the way from Buenos Aires in a bus, an expense which they covered through fundraisers.  During the event, they camped at a campground about an hour outside of the city, commuting in for all the events.

The young, uniformed cartoneros caught the attention of passersby in the crowd not only because of the size of the group – 48 – but because of the worker’s uniform they wore for the pilgrimage. It consists of dark blue pants and jackets lined with neon green strips for visibility, as well as the MTE logo. It clearly marked them as workers. The MTE members stood out for another reason. They conveyed a seriousness that was in contrast to the many of the chatty, smart phone-carrying teenagers. They are young workers, and they seem older than their years.

The MTE, which began in 2000 with the economic crisis in Argentina, has 2,000 members in Buenos Aires and parts of its metropolitan area and 26 cooperatives under its umbrella. The MTE works with other cooperatives, too. It’s a network of 50 cooperatives under a larger umbrella called CTEP (Confederación de Trabajadores de la Economía Popular or in English, the Confederation of Workers of the Popular Economy). Though the Pope had invited waste pickers of the MTE, a member of a meat refrigeration cooperative that works with the MTE and other cooperatives was also present. During the crisis, the bosses of the meat plant stopped paying their workers, who kept laboring anyway.  So they decided to take over the plant. 500 workers camped there for eight months. During those “long months”, member Siveriano said, members of the MTE brought them bags of rice and hot meals. Collective meals were part of the solidarity mechanism that made the shift to popular economy possible in Argentina.

“The MTE has given us a huge hand,” said Siveriano. It has also worked the other way around. And it’s not necessarily about money. It’s about trading or helping out. The refrigeration plant has donated meat to the MTE. The MTE has cleaned the plant. Before coming to Rio, the MTE had met with the MST – Landless Workers’ Movement – in the state of Paraná, Brazil. They urged Pope Francis to meet with landless peoples in Brazil. Earlier this year, the MTE showed its solidarity with a textile workers’ cooperative in Argentina responsible for making their work uniforms when the cooperative was being squeezed out by a private company. Solidarity and inclusion are one of the MTE’s principal values.

“Everyone here has their own problems and the Pope is giving them strength to trascend those problems. Today, waste pickers are included in the world. One of the Pope’s priorities is to include our youth that aren’t included in these events because in the world we are excluded. Now he has made it possible that the youth could be here. He blessed each one, took photos with each one,” said MTE president Sergio Sánchez. (Later, in August, the Pope invited leaders of the MTE to join him in the Santa Marta diocese in Colombia. They discussed social problems around the world, in particular the millions of excluded and marginalized people, and they talked about youth unemployment and popular workers’ rights.)

The cartoneros were tired. They had been going non-stop for several days but they still had a full night ahead of them as the Pope addressed the crowd on the beach. I managed to speak to a few of them before they wrapped up their week and returned by bus to Buenos Aires. 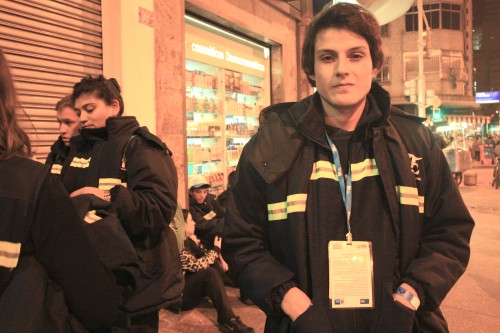 Pablo, 19,  was born into a family of waste pickers. He began working when he was seven years old. He continued to work as a waste picker until last year when he had an opportunity to go back to school. He had to drop out of school in the 10th grade so that he could work because his family was going through hard times financially. “I had to help my family,” he said. He is now taking high school classes for adults. 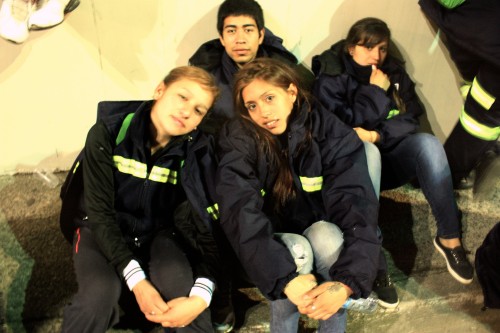 Florencia Palacios, 18, has been working as a waste picker with the MTE for four years. Her mother is president of a cooperative with 52 members in Barrio Carcova. They drive a truck around to pick up recyclables, which they take back to the cooperative to separate. Her father had been the president of the cooperative, and all the legal documents were in his name. When he died, Florencia said, her mother had to sell half of their house in order to register the cooperative. Florencia has five brothers and sisters but she is the only one who works as a waste picker. “It’s very exciting to have the Pope by our side,” she said. 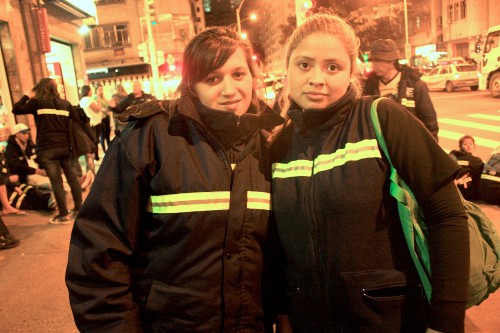 Yamila Lopez, on the right, with an MTE co-worker. (Photo: Deia de Brito)

Yamila Lopez, 20, has been a waste picker for two years. Her father is the president of a cooperative. He’s been struggling for two years to secure a workspace for the cooperative in Provincia, a city outside of Buenos Aires. “We want everyone to have a place to work and not have to work with horse drawn carts. We want everyone to be able to have a truck to be able to work well – work the way it should be,” she said.

“There are many people who aren’t organized – especially in the poorer neighborhoods,” said Yamila, “…where people haven’t had the opportunities to be in a cooperative. Most of the organized waste pickers are in the cities, not in the rural areas.”

In Argentina, the waste pickers say those that are not organized are “in the black”. The organized workers do outreach to “get them in the white”, she said. Right now her father’s cooperative is still “in the black” but they are doing everything they can to become a functioning cooperative with a physical workspace. 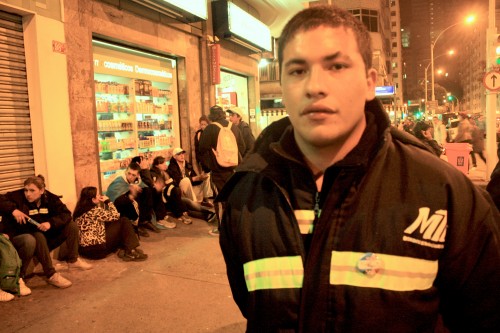 Eduardo Ismael Rodriguez, 20, works at the Cooperative 9 de Agosto (9th of August), in Buenos Aires. He’s been working as a waste picker since he was 7 years old. The rest of his family members no longer work as waste pickers. “I’m the only one now,” he said. He worked for many years as an independent waste picker, with no affiliation to a cooperative. He joined 9 de Agosto when he was 17. “It improved my life a lot,” he said. “Tremendously.”

“I don’t want to be a cartonero my whole life,” he said. “I was studying Economics before but I dropped out.”

Here are some more photos of the MTE

MTE members show other pilgrims photos on their phones of when they met the Pope. (Photo: Deia de Brito)

Members of the MTE holding a photo of the pope during the vigil. (Photo: Deia de Brito)

Representing the MTE and their faith. (Photo: Deia de Brito)

MTE walking the streets of Copacabana during the vigil. (Photo: Deia de Brito)

Members of the MTE on their bus to Rio to meet the pope. (Photo: MTE)

The MTE sitting on the left of the Pope onstage during mass. (Photo: MTE)
Tweet
| Rallies |
Comments Off on 48 cartoneros take a 40-hour bus ride to meet the new pope in Rio
Comments RSS feed for this post.
Loading Comments...