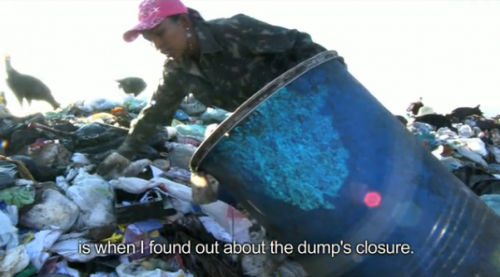 Screen shot from the documentary about Gericinó dump in Rio called “Catador”.

In the first week of September, 246 waste pickers of the Gericinó dumpsite in Bangú, a peripheral neighborhood in the Rio de Janeiro municipality, were facing the possibility of being suddenly out of work. The workers found out that the city, which has been in the process of closing the dumpsite for many months, was going to hand management over to a private company within two weeks time and that the dumpsite would be off limits. This sudden closure completely disregarded the agreements and promises made by Rio de Janeiro Mayor Eduardo Paes. Like the waste pickers of Jardim Gramacho, the Gericinó waste pickers are supposed to receive compensation and other benefits before the municipality closes the dumpsite. And they are supposed to be integrated into a regional recycling plan. (Scroll down to see the video of Gericinó waste pickers meeting with Mayor Paes).

But in early September, the waste pickers — who rely on recycling to support their families — were facing the possibility of losing their livelihoods from one day to the next. “From today on, all the waste pickers here will go hungry,” said Custódio Chavez, representative of the MNCR (National Movement of Brazilian Waste Pickers) and president of the waste pickers’ council of the Gericinó dumpsite.

But after several days of protests that received media attention in which waste pickers blocked the entrance of the dumpsite, not allowing trucks to enter, the city halted its closure and allowed waste pickers to continue working. The closure has been postponed until early 2014. In addition, the municipal waste company COMLURB says each of the 246 waste pickers of Gericinó will receive 13,926 Reais (about 7,000 US dollars), as well as technical courses so they can pursue other career opportunities.

Custódio Chaves says while these advances are good, the amount of waste arriving at the dumpsite has been reduced over the past year. The waste comes from other communities where waste pickers have already been through and picked out all the recyclables. He says while these promises sound good, there is nothing in place guaranteeing when the compensation will be distributed. He says before the closure of these municipal dumpsites, 7 recycling warehouses were supposed to have been built. Until now, only one has been built, and poorly, he said. 50 million Reais, including federal money, went towards this recycling project.

Gericinó receives daily 2,300 tons of waste from 42 neighborhoods in Rio de Janeiro. As part of the national waste policy, all dumpsites in Brazil must be closed by the end of 2014, making way for sanitary landfills. The new Seropédica landfill, which now substitutes Jardim Gramacho, will also receive waste from Gericinó upon its closure.