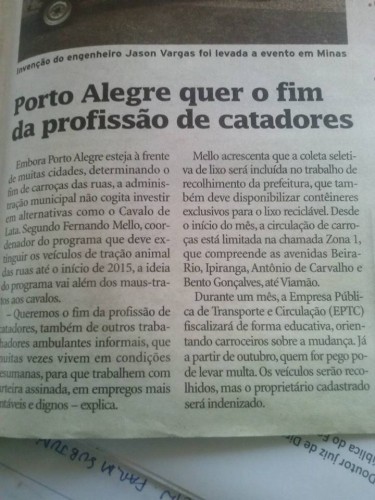 The declaration was published in Jornal Zero Hora on September 6, 2013, page 41

Here is a denunciation of the public statement from the municipal government of Porto Alegre, Rio Grande do Sul (Brazil) published in Jornal Zero Hora (newspaper) on September 6, 2013.

The National Movement of Brazilian Waste Pickers – MNCR/RS, strongly denounces statements made by Fernando Mello, the coordinator of the program that will ban the use of horse-drawn carts by the beginning of 2015. “We want to end informal recycling, as well as other informal livelihoods, that many times operate in inhuman conditions, so that they can work formally and in more lucrative and dignified jobs.”

MNCR would like to clarify that the waste picking profession is dignified. That the recognition as a profession and as a fundamental actor in solid waste management should prevent the act of targeting waste pickers for removal, as the Porto Alegre government has irresponsibly stated. What’s more, the waste pickers’ profitability does not depend on their insertion into the formal workplace. Waste pickers, just like street vendors and other informal workers, demand respect for their right to work. Waste pickers want recognition for their work as a legitimate environmental service, that sends recyclable materials to their proper final destination. As a result of waste pickers’ autonomous work, recyclable materials are inserted back into the production cycle.

Secondly, to desire the end of the waste picking profession — to which the National Waste Management Plan dedicates a specific chapter prioritizing the inclusion of waste pickers — is reproachful, antisocial/inhumane, and only serves to repeat historic behaviors that public participation and democracy have been fighting to change.

Lastly, in the same newspaper, on the same day, on page 13, Antonio Vicente Martins, a lawyer and the president of AGETRA — an association of labor attorneys — provides an opinion piece in support of the MNCR’s platform — that is, for the right to the city and the right to work.  See Martins’ opinion piece here (in Portuguese)