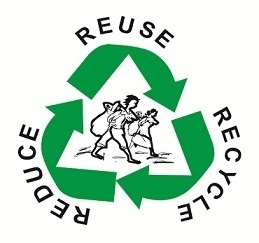 All India Kabadi Mazdoor Mahasang (AIKMM) is a platform for informal waste collectors and recyclers to organize. We work in six states across north India, convening programs that focus on workers’ rights to livelihood, safety, and health.

In its 2009-10, Annual Report the Ministry of New and Renewable Energy (MNRE) estimated that approximately 55 million tons of MSW are generated in urban areas of India annually. This amounts to more than 236 times the annual production of food grains in India. Waste Generation is increasing at a rate of approximately 1 – 1.33% annually which indicates that this problem demands adequate and urgent measures less it becomes a serious problem in future. Millions of workers are involved in work for waste collection, sorting, recycling, and selling material that someone else has thrown away by declaring it as garbage. Livelihood of millions of people depends on this garbage which shows that even after good growth of GDP, our economy is unable to provide sufficient employment opportunities. People are forcibly marginalized and denied use of resources. Contemporary economical setup will increase the population size of waste pickers.

Working very hard in most unfavorable and hazardous conditions, they are the sole player in reducing carbon emission by saving remarkable amount of energy and ensuring recycling and reuse of major portion of the garbage. Their role is not only to serve the environment they are also playing key role to support the executing bodies in saving a huge part of revenue and reducing the carbon emission.

Providing widespread discernible and indiscernible benefits while facing harsh working conditions, often bottom social status, deplorable living conditions and without any civic amenities and support from the government. The most challenging task of municipalities is to segregate the waste to recycle which is served by this section of labourers. In spite of serving to municipalities in suach a vital task, they are unrecognized by the ‘State’ in legislation, criminalized by the ‘Administration’ and ignored by ‘Society’. In comparison to a large section of highly paid workers, these brave environmental soldiers are actual players working for safety of environment without receiving any benefits. In return they are denied inclusion in the public solid waste management systems. Marginalizing those leads to severe social effects and against the principal of our constitution and fail to provide their fundamental rights.

Due to lack of proper recognitions and authorization, waste pickers always suffer from atrocities by the Resident Welfare Associations, Policemen, Colony people, Municipal Authority etc. They are treated as refugees in their own country. With little scope of earning, they are entangled in the web of bribery reminscent of colonial era.

One of the major clause of rejection in the draft is “waste to energy”. The most remarkable example is the waste to Energy plant in Delhi. In 2012, an operational waste to energy plant was set up inOkhla, Delhi to produce electricity but more than one and half year later this plant has not been able to produce even one single unit of Electricity except to release toxic pollutants putting the local community at high risk. There have been studies which prove an higher risk of diseases like Cancer and impotence in communities residing near a Waste to Energy Plant.