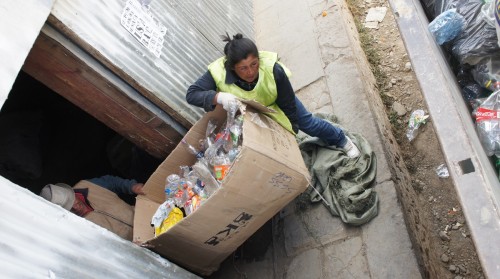 On October 8, the waste pickers’ cooperative Emprendedores Quiaqueños joined the Federación de Cartoneros y Recicladores (Federation of Waste Pickers of Argentina) and presented an action plan in the city of La Quiaca. The actions are being proposed in response to countless promises made by the municipality that have gone unfulfilled, as well as a lack of commitment from public authorities like the municipal secretary of the environment. We urgently need the recognition of the workers that clean the street every single day, by foot, door to door, collecting recyclable materials as a service to society.

Their demands include access to recyclable materials collected in dump trucks before they are dumped in containers, an increase in wages, and that the city provide immediately the tools and equipment necessary for 30 workers (cars, clothing, boots, gloves, etc). They also demand to be recognized as legitimate workers by the municipal Secretary of the Environment, and that the city sign immediately the contract with the Instituto de Viviendas y Urbanismo de Jujuy that presented an infrastructure project that is inclusive of waste pickers and whose motto is “No waste pickers, no Zero Waste.” The Cooperative then rallied in front of the offices of the city’s secretary of the environment and said that if they did not receive concrete responses, they would begin camping in front of the city buildings together with a movement of landless workers.