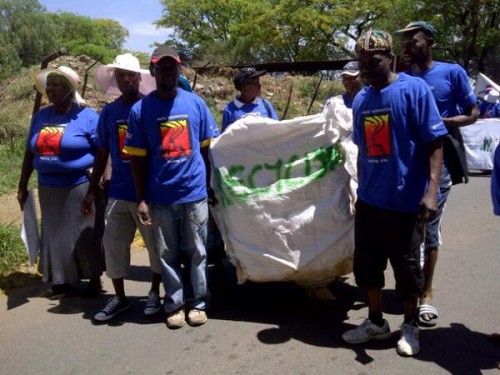 Pretoria, Gauteng, South Africa, 07 November 2013 – Despite South Africa’s waste management legislation [1] stipulating that incineration be the last resort in waste disposal, approximately 300 waste pickers on the Chloorkop landfill in Kempton Park are set to lose their jobs as a result of Enviroserve’s proposed waste-to-energy incinerator. Tomorrow, in a call to the Minister of the Department of Environmental Affairs to place a complete ban on incineration in South Africa, over 500 waste pickers will march to and hand over a memorandum to the DEA [2] at Princess Park, Pretoria.

Incinerators need a large tonnage of waste for fuel and due to its high calorific value (heat generating), recyclables and particularly plastic, are burnt. According to a Friends of the Earth report [3], for every 7 tonnes of recyclable waste recovered or recycled and not incinerated, one permanent job is created. In South Africa, earning potential for a waste picker recycling plastic is R1.50 per kg of PET (plastic) and 60c per kg of paper. If incinerators become the norm for waste disposal in the country, those who were once employed in the local waste recycling economy will lose their jobs.

“Waste incinerators will lead to people losing their jobs. People working on waste dumpsites provide a livelihood for families, so if one loses such a job, it means the family is going to suffer, there will be no bread on the table.”

In the case of the proposed Chloorkop waste-to-energy facility, 2 000 tonnes of waste and recyclables per day will be burnt to produce 35MW of electricity to supply a nearby industrial park. Enviroserve estimates that 40 to 50 jobs will be created. The need for such volumes will mean that Enviroserv could seek further areas to collect waste from, therefore, creating a knock-on effect where waste pickers in other areas will not be getting access to the recyclables they depend upon for their income.

Research indicates that recycling most materials from the municipal solid waste stream saves on average three to five times more energy that does burning these recyclables for electricity. Therefore, the amount of waste needed to produce electricity in this way, is not proportional, particularly when taking into account the factors of job losses, health risks and its contribution climate change [5].

Incinerators typically neither create jobs nor encourage recycling [6], which is directly against Goal 1 of the National Waste Management Strategy which is to promote waste minimisation, re-use, recycling and recover. Incinerators compete directly with these principles as they discourage recycling, produce waste by-products such as toxic ash, and do not allow for the re-use of recyclable materials.

According to Bobby Peek, Director of environmental justice NGO groundWork [7]:

“The SAWPA and groundWork have over the last five years worked at supporting waste pickers in their campaign to successfully convince national parliament to recognise, via the National Environmental Management: Waste Act of 2008, that waste pickers have a critical role to play in waste management systems in South Africa and that incineration is the last resort for waste management. The proposal by Enviroserv undermines this and seeks to set a precedent that will be contrary to democratic legislation and open the floodgates for the incineration of waste”.

Burning waste pollutes people’s health as a result of harmful air emissions and health risks associated with concentrated toxic waste ash. We already have incinerators around the country that do not comply with the minimum emission health standards [8], and when stricter emission standards are implemented next year, non-compliance will most likely be the norm. Despite them being proposed as a clean energy source, waste-to-energy incinerators are a carbon intensive dirty source of energy as they are a source of greenhouse emissions and therefore, contribute to climate change.

This action is part of a Global Day of Action against waste incineration and for zero waste alternatives [9], as well as part of the Global Month of Action against Dirty Energy under the banner of ‘Reclaim Power’ [10], where communities around the world are taking action against dirty energy projects, like waste-to-energy incinerators.

Details of the march are as follows:

Location: Assembly point will be at the Old PUTCO Depot in Marabastad, marching through Cowie Street to W.F. Nkomo (formerly Church Street) and ending at Princess Park.

[1] The National Environmental Management: Waste Act was signed into by parliament in 2008.

[2] Mark Gordon, Deputy Director General of Chemicals and Waste Management at the Department of Environmental Affairs, will receive the memorandum. Hardcopies of the memorandum will be available to journalists on the day.

[3] Friends of the Earth. (2010). “More jobs, less waste: Potential for job creation through higher rates of recycling in the UK and EU”, page 18. http://www.foe.co.uk/resource/reports/jobs_recycling.pdf

[4] The South African Waste Pickers’ Association (SAWPA) is a national movement of people working on waste dumps and in streets collecting waste and earning an income from selling this waste material for recycling. It has over 10 000 affiliates from all provinces, except the Northern Cape.

[10] This global month of action has been organised by a coalition of international networks, including Friends of the Earth International. http://reclaimpower.net/