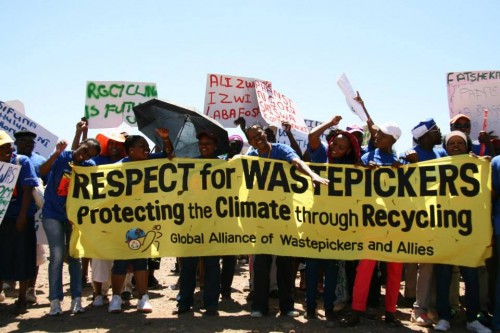 Who are we, the South African Waste Pickers Association?

We, the South African Waste Pickers’ Association (SAWPA) are an affiliation of waste pickers working on more than 70 waste dumpsites (also referred to as landfill sites) and on streets throughout South Africa where our jobs provide us with an income to put food on our tables, clothe and educate our children, and provide us with the dignity that meaningful employment offers people.

We have come together today to object the proposal by EnviroServ to construct a waste incineration facility at the Chloorkop waste site. We call on government to deny EnviroServ permission to build a waste incinerator facility at Chloorkop. Waste incinerators represent a failure of good waste management practices and will take away jobs and livelihoods from South African waste pickers. South Africa’s waste management legislation, the Waste Act of 2008 stipulates that incineration must be the last resort in the waste management cycle after waste separation at source, materials recovery and recycling options have been tried and tested.

We organise collectively and democratically as the SAWPA in order to have a voice that can be heard in a democratic South Africa. This has been strengthened through many provincial meetings and three national meetings since June 2009, where we have discussed issues that affect us and we have planned and subsequently implemented these plans of actions.

We are presently finalising our national constitution, and have developed along with our ally groundWork, Friends of the Earth South Africa, “A Waste Picker’s Guide to Organising” in four of our South African languages.

We have a history that links us to one another in South Africa as well as waste pickers throughout the world. Our members have visited and worked with waste picker organisations and waste pickers in Pune, India; Cairo, Egypt; and São Paulo, Brazil where they have shared experiences and work methods that have assisted in the development of our movement in South Africa.

We have strong relationships with global organisations such as Women in Informal Employment: Globalising and Organizing (WIEGO), the Global Anti-Incineration Alliance (GAIA) and Friends of the Earth International (FoEI), with whom we work to ensure that there is a strong African voice in the global movement of waste pickers, where waste pickers are demanding the right to be allowed to work in the places they choose and that their labour is controlled by themselves rather than major multi-national corporations or private interest.

What is our history?

Our history lies in a struggle to be recognised by government, industry and the people of South Africa.

Our history lies in brutal oppression – which is still found in some places – where we were whipped, shot at and chased off and excluded from our places of work at the waste dumpsites where we collect recyclables for an income.

Our history lies in struggle that has resulted in positive gains for the waste pickers of South Africa:

What has been our approach?

We have made our history a positive one through the slow and deliberate building of our association.

We have, through our work, taken materials out of the waste cycle therefore ensuring that there are less toxins being dumped in the environment.

We have, through our work, of recycling plastic and metals, reduced the need for virgin materials such as coal, crude oil, gas and metals and thereby made a huge impact in the reduction of greenhouse gases by ensuring that society can keep ‘coal in the hole’, ‘oil in the soil’ and ‘gas in the land’.

We have, through our work, offered government and society a way out of the destructive practice of mining that results in the destruction of people’s lands and makes society poorer.

We bring to your attention that the incineration of waste results in the following negative impacts on society negatively:

Based upon the above we call upon Government:

We respectfully request government to respond to our concerns within 30 days.