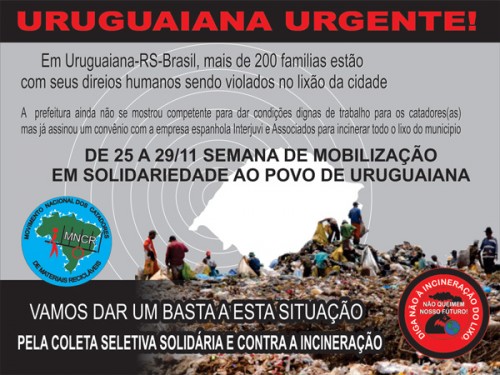 At the end of November, the National Movement of Brazilian Waste Pickers organized a week of solidarity with the workers of the Uruguaiana dumpsite, in the state of Rio Grande do Sul. The waste pickers there have been working in the city for more than 50 years. 75 of the 150-300 waste pickers at the dump have been organized as part of MNCR since 2003. The municipal government has been saying it will close the landfill, contract a private company, and begin incinerating waste. The waste pickers have organized protests and participated in meetings, one of which was attended by the governor and ex-president Lula. During this week of solidarity, the MNCR called waste pickers and allies to show their support for the waste pickers of Uruguaiana.

Update: on November 29, the waste pickers blocked the entrance to the landfill with tires and horse-drawn carts. While that was happening, a public hearing was being held to discuss the waste pickers’ situation.The MNCR presented a dossiê to city leaders at the hearing, documenting decades of violations. They also presented a letter to the Mayor, demanding his signatures. In it were a list of demands, including a proper workspace and a recycling system that integrates the waste pickers, and ending the contract with the incinerator. The Mayor signed the letter, agreeing to meet the demands. MNCR thanks everyone for their participation in this struggle! Read the full post (in Portuguese).

Tweet
| Incineration | Tags: incineracao, incineration, organizing
Comments Off on A week of solidarity with the waste pickers of the Uruguaiana dump (Brazil)
Comments RSS feed for this post.
Loading Comments...