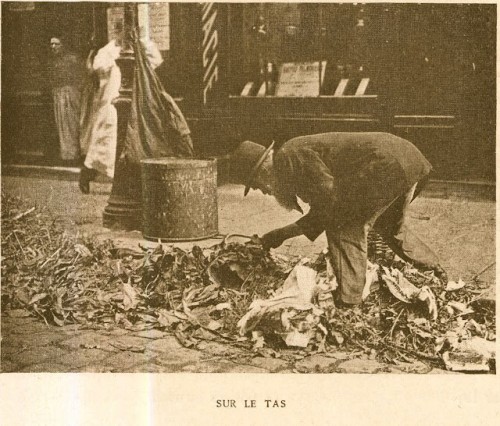 “The banks are yours”…

That was what the Paris City Council announced last summer during the launch of its Paris-Plage initiative designed to turn the banks of the Seine into a place of leisure. However, this promise of a public open space, a dream city accessible to all, must be confronted with the harsh reality: we must fight today for the right to access public space as well as to be visible and heard in the social dialogue. Proof, waste pickers and dealers, or biffins, who are both witnesses and victims, these descendants of waste pickers who deal in “junk”, la biffe, the business of recovering and reselling used objects of all kinds, and who are now discriminated against and prevented from going about their business.

… but the biffe is been kicked out of Paris

Indeed, over the past ten years, particularly under the policies espoused by the PS (Socialist Party) which proclaims “the banks are yours”, the junk trade, everywhere, has been kicked out of Paris. To operate their business, biffins have little choice as to the date and places: they are forced to become curbsiders, sell on the fly, mostly on the outskirts of Paris, from Friday to Monday, threatened by police who arrest them and confiscate their goods, without any inventory, such that, even today, biffins are labeled as “ragpickers”. These conditions create a real danger to the safety of waste pickers cum dealers and constitute a significant loss in terms of junk trade. Why these repressive policies? Why stigmatize anything that relates to the junk business? Why force us out of the junk trade, a business activity so critical during these times of crises in that it allows many people in precarious circumstances to make ends meet or simply to survive?

The AMELIOR association is fighting for the recognition and defense of the junk trade by holding markets where each member can come, unpack and sell used materials on a spot assigned at a fixed price and ranging from 2 to 4 metres per biffin (which amounts to roughly 3 metres per biffin). This organization is viable and has been tested in Montreuil, where its monthly market, held under the Croix de Chavaux Market Hall, is a great success with a growing influx of customers and no report of incidents or sanitation issues. Indeed, contrary to the accusation regularly levied against it, the junk trade is not a dirty business (unless, of course, efforts are not made to drag it through the mud). It is an activity which seeks to reduce waste and, generally speaking, protect the environment (especially since bargain hunters will often come and go on foot).

Why continue to suppress the junk trade?

Following the recent election of new municipal teams, especially the reelection in Paris of the PS, which has for years “managed” the problem through repression, this absurd, expensive and criminal situation must end. Summer is coming, the banks will reopen and biffins cannot remain on the sidelines. Waste picking and trading must take place in July, August, all summer and year round! All year, we must display our beautiful junkmen complexion, because junk trade is fashionable! Ladies and gentlemen the elected municipal officials, you must stop suppressing waste picking and trading, talking about doing so or obsessing over it! Rather, create new market areas as biffins, everywhere, are waiting and expecting a policy worthy of the name, which recognizes the value of the junk trade and provides the space it deserves. Let us speed up the junk business! All to the junk market!

Under the CROIX DE CHAVAUX HALL MARKET in Montreuil

(We are hoping to soon be able to have a little more choice in dates, thanks to some courageous decisions on the part of local authorities.)

Tweet
| Rallies |
Comments Off on The Biffins of Paris will march for their right to work on April 9!
Comments RSS feed for this post.
Loading Comments...