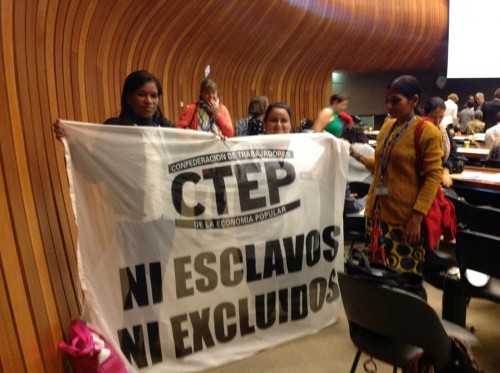 Paola Caviedes, a waste picker with the Movement of Excluded Workers of Argentina (MTE) and affiliated with the Confederation of Workers of the Popular Economy (CTEP), traveled from Villa Fiorito all the way to Geneva to speak on behalf of the workers of the popular economy and advocate for the right to unionization. Waste pickers, street vendors, domestic workers, farmers, construction workers and others often don’t have rights or representation.

“The popular worker creates his or her own work in order to survive…We are not small independent business owners. We are workers and we have rights. The owners and governments try to avoid responsibility by placing us in the category of ‘self-employed’ workers,” said Paola after landing in Buenos Aires.

One of major points discussed during the debates was what governments call “occupation” of public space and that the majority of popular workers do their work in public spaces.

“In our case – the cartoneros, or waste pickers – we’ve worked in the streets for many years. Before, they wanted to remove us from the streets, but for ten years, we’ve been receiving the recognition of of the Buenos Aires government and slowly we’ve gotten increasing recognition. Today, we are the waste picker cooperatives that provide a public service by recycling. If they take the streets away from us, they take away everything,” said Paola. Read the complete press release (in Spanish)