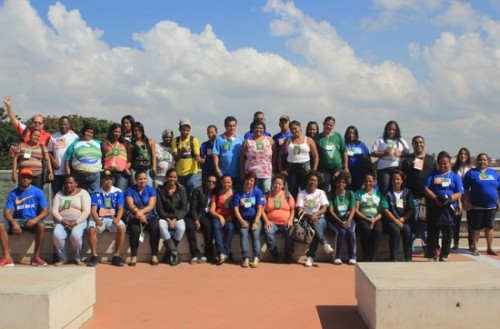 The Movement of Brazilian Waste Pickers (MNCR) saw the positive results of its efforts to integrate waste pickers across the country in recycling services during the World Cup. Close to 840 waste pickers organized in cooperatives and networks were part of the recycling effort across 12 World Cup stadiums, as well as at official World Cup events. This participation is the fruit of a partnership between MNCR, Coca Cola and FIFA, which contracted networks of cooperatives in the Cup’s host cities, and paid the waste pickers for the service, as well as for training and uniforms. Payment for their work at major events is not new, with events like the Confederation Cup, in which waste pickers contracted in Rio de Janeiro gained recognition performing a successful recycling service. During the World Cup, each waste picker received 80 Reais, or 40 USD per day, and compensation for transport and meals. In the São Paulo games, 70 waste pickers worked in the stadiums, and 30 worked in the separation of recyclables in the Cata Sampa Network’s sorting warehouse.

Some children of waste pickers were also invited to hold the Brazilian flag on the grass during the games. Mariana Gregório de Paula, 14 years old, and the daughter of waste picker leader Eduardo Ferreira de Paula, participated in this event. “I can’t wait for this day to arrive,” she said.

The MNCR participates in the Comitê Popular da Copa, or the Popular Committee of the World Cup, a group of social movements that has been fighting for their rights in the lead up to the World Cup. “We have to demand our rights but we hope that there will be no violence,” said de Paula.

The Ministry of the Environment (MMA) opened up funding for World Cup host cities to include waste pickers. Six cities were given about 1 million USD. With this investment, local governments are being incentivized to contract cooperatives to perform recycling collection around the stadiums and near the events related to the games. All of the recyclables collected is supposed to go to waste pickers’ cooperatives. In the six cities where the funding was allotted (Belo Horizonte, São Paulo, Fortaleza, Curitiba, Manaus and Natal), the waste pickers are being trained and will be paid for their work. The money will be used for training, uniforms and protective gear, and communication about the recycling system.

“There was a selection of waste pickers and unfortunately we couldn’t include everyone, but I think that the waste pickers that were chosen will aptly represent the category and elevate the self-esteem of all,” said de Paula. “We face the challenge of organizing the waste pickers – the more organized we are, the stronger we become, especially in demanding our rights. We want to be recognized across the globe for our work,” he said.