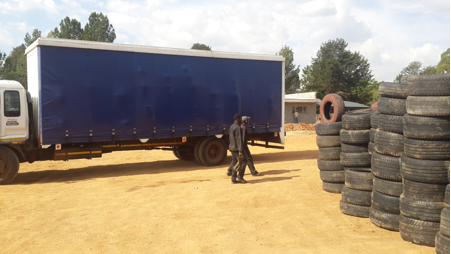 The Recycling and Economic Development Initiative of South Africa (REDISA) has been tasked by government to deal with waste tyres. Tyres are a problematic waste stream as they take up a huge amount of space at waste landfills and dumps. Besides this, due to methane gases released by decomposing waste, landfills are prone to catch alight, causing fires that can continue for days. So now, just like a plastic bag at a supermarket, each tyre bought has a levy to facilitate disposal at the end of the lifecycle.

South Africa produces more than 200 000 tonnes of waste tyres a year and currently only a small fraction of that is being recycled or re-used. In previous newsletters we outlined REDISA’s plan to reduce the impact of tyres to the environment and create employment by recycling or reusing them into different products such as rubber crumb that can be used to build roads or repairing them. At some point, however, tyres need to be disposed of and the levy the consumer has to pay therefore helps play a role in making sure that this waste stream is safely disposed of.

Tyre recycling is bound to create many jobs because organizations and individuals can register to be tyre collectors, transporters or tyre recyclers. All these stages need employees who register with REDISA to access the employment benefits. If an unregistered person or organization decides to take old tyres to the recycling depot there will not be any payment given to such a person as they are not a registered supplier to REDISA. This plan is very much pro-job creation – there are thousands of people who will earn an income as a result of REDISA’s approach.

The South African Waste Pickers’ Association (SAWPA) are in the process of registering with REDISA as tyre collectors and/or transporters. Waste pickers are already in the business of recycling and this plan is just adding one more waste stream to collect. The main towns will have a recycling depot. The depots will be used as temporary storage before they are taken to the manufacturers. Tyres will be collected by collectors, who then pass the tyres on to transporters, who drop them at the depot for collection by the manufacturers. We have seen the Midrand depot where this process is being implemented practically. So far REDISA’s pilot project in Midrand does not have many challenges, and this is really promising.

The only challenge is that the country does not have a big enough tyre crumbing industry to recover rubber from tyres. REDISA will have to take some tonnages to cement kilns to be incinerated until the manufacturing industry is ready to take the bulk of the tyres. Incinerating waste, and in particular tyres, in cement kilns has been a long standing issue for groundWork, who has fought against government and cement companies, as cement kilns have proven to be the cause of so many challenges, including poor air quality. REDISA had promised to only burn those tyres that cannot be recycled. At the depot this is not happening as all the tyres that come through are headed for cement kilns.

The waste hierarchy is being recognised in this plan and so it is a good one, and it could end up being the model for dealing with all other waste streams in the country. If this plan is not carefully thought through, though, it might end up just like the plastic bag recycling company that failed, despite all the millions of Rands it collected from tax payers. The plastic bag recycling initiative failed due to a number of things, including financial mismanagement, and it ended up shutting down its offices and is now managed by the Department of Environmental Affairs.

While it is positive that REDISA and SAWPA are busy registering waste pickers as collectors and transporters in different towns and regions, the plan has to move away from burning tyres in cement kilns because we cannot solve the problem by creating another problem of toxic air and ash. Rubber crumbling plant should be funded by REDISA and rubber should be recovered.