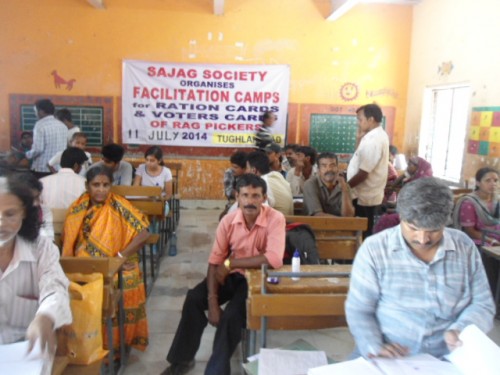 Greetings from KKU! I am glad to inform you all that Sajag/Kachra Kamgar Union (KKU) has conducted a very successful campaign for enrollment of rag-pickers to the electoral rolls of Delhi and also facilitated their applications for ration-cards under recently passed Food Security Act. It was a month-long intensive campaign which started from 12th June 2014 and continued till 11th July 2014. In this campaign, we covered thirty rag-picker clusters which fall under ten Assembly Constituencies of three (South, South-west & West) districts of Delhi. We also covered ten Circles of Food and Supplies Department of Delhi.

We facilitated thousand families for food security and enrollment of 2500 rag-pickers to the electoral rolls of Delhi. For this, we held camps in government schools located nearby rag-picker clusters. In these camps National Campaign for People’s Right to Information (NCPRI), and Mazdoor Kisan Shakti Sangathan (MKSS) interns and other volunteers also helped a lot. They helped in completing the formalities such as filling-up the form-6 for the voter card and the application forms for ration-cards which was of immense help for the rag-pickers. The Right to Food Campaign was also instrumental in facilitating meetings with the Food Commissioner of Delhi.

In this campaign, on an average three to four representatives of Election Commission of Delhi were always present at our camps throughout the day. They accepted the duly filled-in forms directly from rag-pickers and issued acknowledgement slips at the spot itself; they also helped in filling-up the forms of rag-pickers whenever there was too much rush which helped the rag-pickers immensely. For this, we are deeply grateful to the Chief Election Commissioner of Delhi and their entire team of the Election Commission.

Initially we had also contacted the Food Commissioner to send their representative to our camps to accept forms directly from applicants but for some reason they could not send their representative. Instead the department suggested that Sajag should submit the duly filled-in application forms in bulk to respective Circle offices, so now we have submitted all the forms to the respective Circle offices of the Food and Supplies Department and have received the receipts.

We are also glad to inform all of you that the authorities have been taking prompt action on the application-forms we had submitted earlier to them. Field-verification of these applicants has been started by the authorities and we hope that they’ll get their voter cards as soon as possible. We also hope that the Food and Supplies Department adheres to its earlier promise of issuing ration-cards to our rag-pickers on a priority basis.

As you all already know that these documents are very essential for mobilising political support for the marginalized communities such as the waste-pickers and especially in the case of Delhi where most of the rag-pickers are actually migrants from different states (such as West Bengal, Assam, Uttar Pradesh, Bihar, etc.), their concerns and voices were never heard by the policy-makers of Delhi. We hope that issuance of these documents will provide some semblance of dignity and identity to the rag-pickers and will help in mobilising political support for them. We are also happy to note that this is the first time that such an exercise at such a large scale has taken place in Delhi for waste-pickers.

It is indeed a great breakthrough for us and we all can try to replicate this in our respective constituencies and try and make the lives of rag-pickers a bit better. For any information and clarification regarding this, we’ll be more than happy to help. Please feel free to write to us.

Also, see article “A long wait for waste pickers to get ration cards” in The Hindu