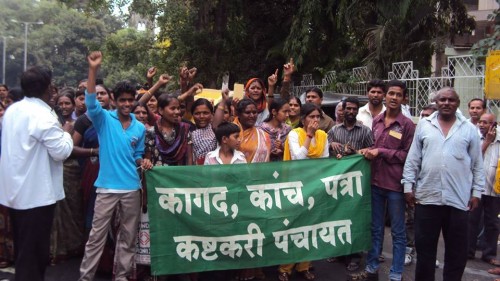 Appeal to All Citizens of Pune to Support the Campaign–Notify the inclusion of waste pickers’ children in the scheme – “Pre-Matriculation Scholarship for children of those engaged in Unclean Occupations” immediately and implement it w.r.e.f June 2013.

The idea of “equity in education” in India has unfortunately remained just an idea… And this is despite the fact that a large section of the marginalized in our country has been involved in its pursuit. Access to education continues to remain difficult for the children of waste pickers whose relentless efforts and petitions have fallen on deaf ears, and don’t find a place within the agenda of the Maharashtra government.

It took seven years for the Central Government to recognize that wastepickers’ children would need support for their education. After years of lobbying with the Ministry of Social Justice and Empowerment in Delhi, In May 2013, waste picking was finally included as one of the occupations eligible for inclusion in the “Pre-Matriculation Scholarship for children of those engaged in Unclean Occupations”.

For over a year waste pickers have been demanding the implementation of this scheme. . The Ministry of Social Justice and Special Assistance, Government of Maharashtra has failed to issue a simple notification regarding the inclusion of children of waste pickers in the scheme which is 100% sponsored by the central government. The loss of scholarships of crores of rupees has been borne by approximately 60,000 wastepicker beneficiaries in the year 2013-14 alone.

With a sense of complete despair in the Social “Justice” department, over 500 wastepickers of Kagad Kach Patra Kashtakari Panchayat, the trade union of wastepickers in Pune, gathered outside the Social Welfare Commissioner’s Office on Friday, the 25th of July, 2014 to change the name of the department to Social (In)justice. The waste pickers feel this is the only way to shake the Government of Maharashtra out of its apathy.

From the 28th of July, waste pickers in Pune are going to agitate indefinitely for the fulfillment of this demand.

We, demand that the Chief Minister of Maharashtra:

1. Immediately notifies the inclusion of children of waste pickers in the Pre-matric scholarship for children of those in unclean occupations

2. Implements the scheme with retrospective effect from June 2013, so that children are not penalized for the delays on the part of the Maharashtra Government.

3. Matches the scholarship amount given by the central government from the state budget for children in high school.