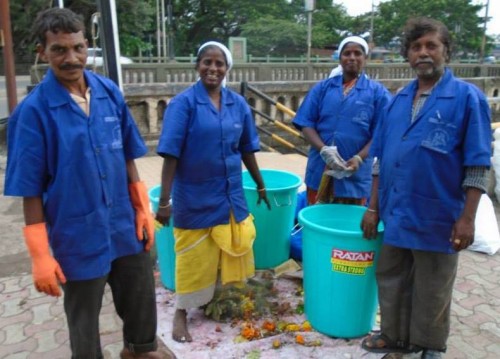 The swarming river ghats of Pune continue to fill as uninterrupted resounding crowds arrive from all directions of the city to bid farewell to Lord Ganesha. The significance of immersing the idol symbolizes the Lord taking our sorrows along with Him and returning again next year to protect us. But between this symbolism and merriment lies the bleak reality of ecological degradation that comes with immersing idols and Nirmalaya (festival offerings) in our water bodies.

As part of the 7 year old Nirmalaya Campaign led by SWaCH – a Pune based waste picker’s collective, every year waste pickers face an uphill battle during Ganesh Chaturthi dissuading devotees from dumping floral offerings in the city’s rivers. Citizens in huge numbers gather around the ghats of the Mula and Mutha rivers to offload a mountain of Nirmalaya, including flowers, fruit, coconuts, cloth, incense, camphor and thermocole based elaborate decorations used for housing the idols.

Amidst all this chaos and madness are the resolute waste pickers doing their bit for the environment and planting responsibility in the minds of the festive mobs by diverting tons of nirmalaya.

Despite heavy rains, lack of toilets at the ghats and without any financial support from Pune Municipal Corporation for the nirmalaya collection initiative, 125 waste pickers of KKPKP and SWaCH along with over 500 environmentally-conscious volunteers diverted a staggering 177 tonnes of Nirmalaya from 18 ghats across PMC and PCMC this Visarjan.

The Nirmalya Project’s success hinges largely on its participatory nature and the fact that it touches upon an issue that is of interest and concern to many – safeguarding the environment. Without requiring any special technical or knowledge skills, citizens can volunteer their time to achieve an easily quantifiable target – which gives a tremendous sense of satisfaction. Corporates who have understood the Nirmalya Project and its potential, tend to view ‘adopting a ghat’ as a facet of their on-going CSR work. ‘Adopting a ghat’ involves both financial support and HR support (employees are encouraged to volunteer their time on the ghats and be personally involved in looking after their city’s natural resources).

Volunteers from Cummins, Emcure, Praj Industries, Rotary Club of Kothrud, Fergusson College, Modern College, D. Y. Patil College of Pharmacy, and Symbiosis School of Economics along with several individual volunteers were part of the process, working tirelessly late into the night to divert as much Nirmalya as possible from the rivers.

“I participated for the first time in the Nirmalaya sankalan, it was exciting as well as a new exposure to learn the customs of Maharashtra. Corporate Responsibility activities are a good source of contribution to the environment. It feels good” says Kirti, an employee with Cummins.

“People are respectful to the waste pickers and a lot of them already knew that they have to give theirNirmalaya to us” says Mangal Pagare of SWaCH.

“We were able to collect Nirmlaya from the ghats because volunteers and people were very cooperative this year and ” says Anita Sunil Dahake, waste picker.

However what remains unchanged is the lack of sanitation facilities at ghats. “No toilets and too much labor is involved. People must appreciate our work” says Lila Kastur Dehade, a Swach waste picker.

“Many people already knew of SWaCH, and recognized the waste pickers when they saw them on the ghats. So a lot of people were ready to come and give their Nirmalaya, and the SWaCH workers accepted it graciously–but never pushed or argued when people seemed disinterested.” Claire Thompson, SWaCH Intern.

“Our social responsibility as a citizen of the world and one of the most genuine things we can do in terms of being a human being, is to put our time and energy into trying to make a better planet for everyone,” says Rajni, a volunteer from Viman Nagar.