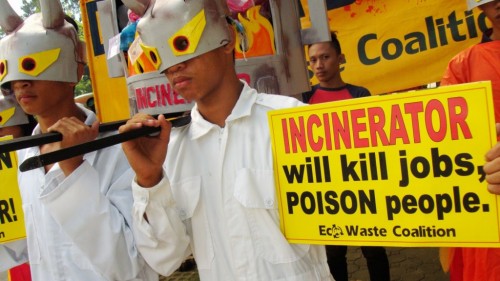 Members of the informal waste sector or IWS and community and environmental organizations marched to the Department of Environment and Natural Resources (DENR), then to the House of Representatives today to shun attempts to legalize incineration and to protect thousands of waste management-related jobs and valuable resources from ending up in dirty smoke and ash.

Led by the zero waste advocacy network EcoWaste Coalition, some 100 waste workers and environmental activists joined the protest march and assembly to express their firm opposition to moves by the Metro Manila Development Authority (MMDA) and some lawmakers to open the floodgates for waste incineration. The group, instead, proposed zero waste approach as the real solution.

During the activity, the group portrayed the horror of incineration through a tableau highlighted by a depiction of incineration as an insatiable monster named “Toxic Burner,” with its fiery mouth full of all sorts of waste and paper money to show valuable resources and livelihood getting burned. The monster horns, meanwhile, emit toxic smoke.

In the Philippines, over 100,000 workers, by rough estimation, live by means of recovering and selling tons of materials, which go back to factories for purposes of recycling, creating jobs along the way.

In a statement, Fr. Jose Vicente Y. Tin-Ga, President of Lingkod Mamamayan at Lipunan Foundation Inc., a community-based organization in Rodriguez, Rizal, dedicated to the promotion of the welfare of the waste pickers working with wastes in and around Rodriguez Landfill, said that “If you burn wastes altogether, the waste workers do not have anything to salvage and sell, so they end up without livelihood, which in Rodriguez would mean more than 4,000 waste workers losing their jobs.”

“Incineration also goes against the spirit of the Clean Air Act, which is supposed to protect the people and the environment from the hazards of air pollution, to be made worst by the inevitable toxic fumes and ashes from incinerators,” Lucero added.

“Contrary to what is being peddled by incinerator proponents, even so-called modern incineration release highly toxic air emissions that include tons of carbon dioxide, acid gases, heavy metals, and new and more toxic compounds, such as dioxins, furans, and even PCBs,” Lucero explained.

The Coalition emphasized that even when an incinerator is equipped with sophisticated ‘scrubber’, toxic releases to the environment are merely transferred to the solid by-product which is the fly ash that has to be safely disposed of.

As genuine solution to the country’s waste problem, EcoWaste Coalition pointed out that zero waste concepts, in addition to what is already mandated in RA 9003, will greatly eliminate wastes.
“It entails the participation of every sector in society to achieve zero waste: product design should promote easy and non-toxic recycling; product manufacturing should make use of environment friendly processes and materials; and extended producers’ responsibility, e.g. “take-back” policy must be adopted and seriously implemented,” EcoWaste Coalition clarified.

“Nonetheless, segregation at source, reusing, recycling, composting, banning of non-environment friendly products and packaging, set-up of materials recovery facilities — all enshrined in RA 9003, will work wonders if implemented by LGUs. A good example is San Fernando, Pampanga, which now has a waste diversion rate of 55% as a result of implementing major provisions of the law,” stressed the group.