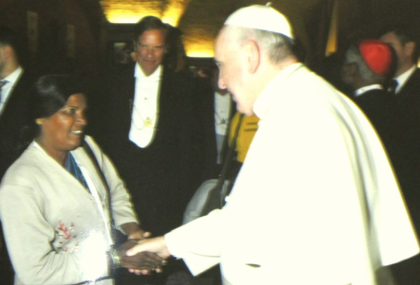 “Hum apna haq mangte, nahi kisi se bheek mangte”, said Rebecca Kedari Thomas, a KKPKP waste picker, proudly, at the “World Meeting of Popular Movements” held in the Vatican City, Rome from October 27 to 29, 2014. Organized by the Pontifical Council for Justice and Peace and the Pontifical Academy of Social Sciences with the support of Pope Francis, the convention was structured to view and discuss ways of social inclusion by reflecting on organizational experiences of popular movements of most disadvantaged and excluded, across the world.

Pune based waste picker’s trade union – Kagad Kach Patra Kashtkari Panchayat was one amongst the 150 participating organizations across the globe. The convention saw leaders from grass root organizations and popular movements of waste collectors, excluded workers, migrants, informal and young people’s groups, landless farmers, inhabitants of urban informal settlements and marginalized areas etc. A significant number of bishops and other Church workers from different countries were also part of the meeting in order to encourage dialogue and collaboration with the Church.

“The poor not only suffer injustice but also fight against it!” said Pope Francis. He said, “in the fulfillment of the full development of all men and women, our commitment on seeking justice and peace cannot remain indifferent to the current situation of global social exclusion, we can’t neglect the growing degradation of the workers and working conditions, their housing and food, because it affects millions of people worldwide. These situations constitute a grand wake-up call for all humanity.”

The experiences of growing inequality and social exclusion, primarily the exclusion of land, labor and ceiling was shared through the testimonies of the participants. As part of this, Rebecca shared her struggle as a waste picker and how she has transformed from a waste picker to a service provider. The audience was quite moved to hear the challenges in the formation of the trade union – KKPKP through her lens and the discrimination she faced at every level. She also added that despite 25 years of existence of the trade union, the Waste pickers of Pune are still struggling for recognition by Pune Municipal Corporation and fighting for their basic human rights like inclusion in social security schemes and education for their children.

Concluding the three days event, the Pope assured his support to all the social movements and said the structural causes of poverty, inequality, lack of labor, land and housing, denial of social and labor rights needs to be combated. He added that we need to change the system- “We must do so with courage, but also with intelligence. With tenacity, but without fanaticism. With passion, but without violence.”