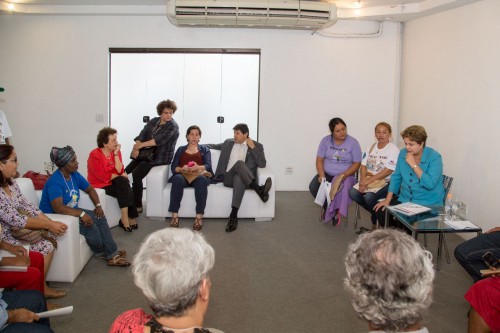 On the last day of Expocatadores, Brazilian President Dilma Rousseff joined the waste pickers in their annual procession. At Expocatadores, she had listened to the demands of the national waste pickers’ movement (MNCR) and during the ceremony, she joined various authorities and emphasized the movement’s achievements. Roberto Laureano, of the MNCR, said, “As waste pickers, we want to continue being protagonists in this process and that municipalities don’t even need to think about incineration.” He thanked Rousseff for supporting their cause of not extending the national deadline for the closure of garbage dumps. He criticized the weak points and inaccessibility of Cataforte III, the government program meant to strengthen waste pickers’ cooperatives. Rousseff said that cooperatives should have the same economic importance as small businesses and that municipalities must be on board for waste-related public policies to work on a national level. Waste picker cooperatives from several cities were publicly handed their awards for successful programs. Mayor Fernando Haddad stressed the need to invest in improving the conditions of recycling centers run by waste pickers. During the ceremony, five agreements were signed, all of which benefit waste pickers’ cooperatives in the areas of training, technical and social assistance, infrastructure and environmental education. “You work with what is thrown away but you also work with possibilities, of building a better future. That’s why I call you the ‘waste pickers of the future’!” said Rousseff.