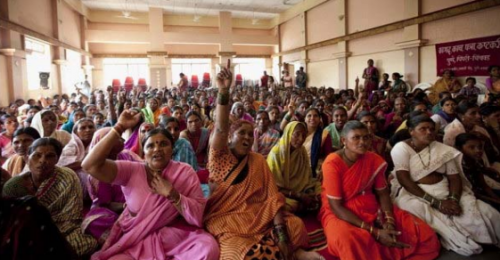 The PCMC has appointed 300 waste pickers for door to door collection of waste through labour supply contractors. As per law, it is mandatory to pay such workers minimum wages prescribed by the government of Maharashtra from time to time. But for over two years workers have continued working without the prescribed minimum wages or any other statutory benefits due to the absence of appropriate conditions in the previous tender. They are not even entitled to weekly days of rest!

For two years Kagad Kach Patra Kashtakari Panchayat, the 20 year of trade union of waste-pickers, has been demanding justice for these workers. Paying heed to their demands the PCMC has published a new tender which will guarantee workers their basic rights such as minimum wages, employees’ state insurance, provident fund, bonus, paid holidays and protective equipment. The contractors will be paid a 10% commission on the wages paid to workers for managing the work. The tender has also done away with cash payments and contractors must pay all wages directly in bank accounts of workers. The PCMC is not the first state agency to embrace such norms and conditions, which are the standard in government contracts. The tender also includes conditions for inclusion of waste-pickers to comply with directions of the Mumbai bench of the High Court.
However, this move for transparency and fair commission has not gone down well with labour contractors who have complained about the taxing nature of the tender conditions. A look at the profits made by labour contractors over the past two years reveals why exactly they are opposed to the proposed system.

The current contractors for waste collection made over 1 crore in profits through three separate contracts during the period of November 2012 and October 2013. It is safe to assume that their total profits are more than two crores till date. At the same time, workers have been cheated of over 6 crores in their wage payments. Obviously, no contractor had complained at the time of taking the existing contracts.

Similar opposition was raised against the PCMC’s tender for supply of labour for cleaning of roads in November 2013. The tender was finally withdrawn and the commission was raised from 5% to 10%.

“Generally speaking, the entire contract labour system is exploitative of workers and Kagad Kach Patra Kashtakari Panchayat has been demanding that the PCMC ensure protection of workers’ wages and their livelihoods. Finally it seems that the PCMC has decided to establish a relatively fair and transparent mechanism for contracting labour” said Surekha Gade, chairperson of KKPKP at a meeting with waste-pickers on Friday.

“The cleanliness of Pimpri Chinchwad is in the hands of these waste-pickers who are mostly women from poor, dalit and marginalised sections of society. No campaign for clean cities can ever be successful unless such waste-pickers are given their rightful dues. As a principal employer, it is the responsibility of PCMC to protect their interests. Otherwise, waste-pickers will continue their struggle against this ongoing injustice through peaceful and constitutional methods of agitation” said senior labour leader Baba Adhav.