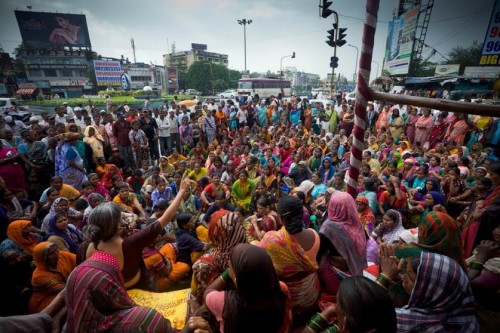 The three hundred waste picker members of Kagad Kach Patra Kashtakari Panchayat (KKPKP) engaged by the Pimpri Chinchwad Municipal Corporation have won a hard fought battle for Minimum Wages and other statutory benefits such as PF and ESI.

“The work performed by waste pickers is very important for the city. I welcome the step of providing minimum wages and other benefits to them. They should receive all wages and benefits due to them and I will continue to support them in their struggle,” stated Mr. Lakshmanrao Jagtap, the MLA from Chinchwad.

On Thursday, January 22, the Municipal Commissioner agreed to discontinue existing contracts for door to door collection of waste in A, D and F Prabhags (wards) of PCMC. Under these old contracts, the Corporation was paying a lump-sum of Rs. 6000 per waste picker to labour contractors who were responsible for compliance with labour laws. “The contractors were in fact only paying Rs. 3000 – Rs. 3300 to waste-pickers and not providing any PF, ESI, medical or safety equipment. The arrears of wages over 27 months are more than 1.5 lakh per waste picker!” said Harshad Barde, general secretary of KKPKP.

Through the continuous efforts of KKPKP, the PCMC has now agreed to publish new tenders clearly specifying minimum wages payable per worker. Contractors will receive a service charge over and above such wages for meeting operations and management costs. All wages will have to be paid directly into the workers’ bank accounts and monthly proofs have to be submitted to Corporation.

“We have been exploited and harassed by contractors for two years, but we kept on fighting. Now let us see who will take up these new contracts when there is little scope for stealing our dues!” said Anita Dahake while announcing the news to the two hundred odd waste pickers gathered in protest of harassment from labour contractors.

“Finally, the Corporation has acknowledged the contribution of waste pickers towards conserving our environment and keeping our city clean. In addition to statutory wages, waste pickers will have the right to retain the dry waste painfully segregated by them through the day. Further, KKPKP’s waste picker members will be provided ID cards and life insurance by the Corporation. We have also been assured by the Commissioner that all needful steps will be taken to clear the wage arrears due to our members,” quips a jubilant Sonali Kunjir, joint-secretary of KKPKP.

Through a settlement order of the High Court in February 2013, these 300 waste pickers also won the right to be engaged on priority by the PCMC for waste-collection work.