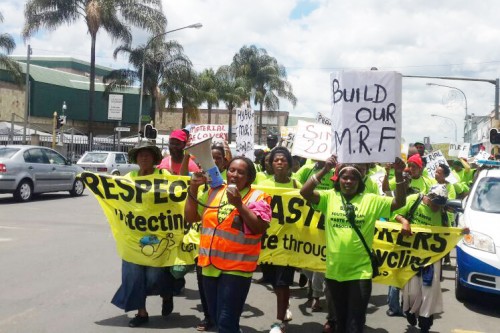 After waiting for three years for the construction of a materials recycling facility (MRF) at the New England Road landfill site in Pietermaritzburg, KwaZulu Natal approximately five hundred waste recyclers or pickers took to the streets of Pietermaritzburg in December 2014. This march was targeted at the provincial Department of Cooperative Governance and Traditional Affairs (CoGTA) which has neglected its oversight responsibility over the local and district municipalities in Pietermaritzburg, although the responsibilities of the two municipalities involved with this agreement were not ignored.

Financing of R21 million from CoGTA, with the Hlanganani ma-Afrika Waste Cooperative as sole beneficiaries of the MRF, was agreed upon between all stakeholders involved. Msunduzi Local Municipality allocated land next to the landfill site for construction. However, from what we have heard, the disagreements between the Msunduzi Local Municipality and uMgungundlovu District Municipality have stalled the project, despite site handover and appointment of a construction company by the district.

Having an MRF at the landfill site means that recyclable waste will be diverted from the landfill, therefore creating better working conditions and improved incomes for waste pickers. Expansion of the cooperative membership is a future objective in order that no waste pickers are found on the landfill, but rather at the MRF. Landfill accidents have been in the news in the last three months following the death of one waste picker who was run over by a compactor, and another who was crippled. An MRF will prevent such incidents because it will bring about formalisation of waste pickers’ work.

These accidents have been in the media, but none of the politicians or senior officials are taking responsibility. Accidents are happening as we speak and no one is held accountable for these deaths. We live in a city that lacks common sense! Officials and politicians are busy wasting time and money and their inactions and failure to deliver on promises made to the poor directly end up killing people like waste pickers.

Both municipalities have been found in the corruption cloud before and this project had the potential to make up for that, but seemingly both politicians and officials are not willing to deliver the MRF. In the past, the disbanded National Prosecuting Authority’s Scorpions unit raided Msunduzi offices because of corruption allegations, and this was followed by the suspension of five city managers. Later, the city was declared bankrupt and it was under administration. At the same time, the district municipality had appointed an unqualified person as municipal manager who failed to prove that she had the higher degree that she claimed to have. Another scandal linked to the district was when the mayor appointed her personal partner’s company to provide a service for the district. This was uncovered by the media and a court case was opened.

It seems that all the above scandals were not enough, according to the politicians and officials, even though CoGTA has allocated the district a grant to build an MRF to replenish the image of both municipalities. Between the municipalities, no one is coming out to say why they have not delivered the project. It is surprising to say they would refuse to implement the project when the funds have been allocated; it makes no sense and we are forced to ask where the money has gone.

The cooperative and waste pickers at large demand answers regarding the MRF and that is why they decided to hold a protest against both municipalities and CoGTA. CoGTA needs to play its role in assisting municipalities on many fronts, including conflict resolution if there is any, funding and implementation of projects, but this has not happened.

The delay in construction of the MRF has sparked friction amongst cooperative members because some of the members do not understand what the holdup is. The leadership is being blamed, as if it’s not telling the members the truth. Some members have left the landfill and they are collecting from the streets of Pietermaritzburg because the condition at the landfills is worsening.

This issue has been raised with the Minister of the Environment through emails and meetings with the Director General, but the matter has not been addressed. This project had the potential of creating more than one hundred jobs, but this is seemingly meaningless to the corrupt officials. They simply don’t care. The licence as well as the licence conditions do not allow for uncontrolled salvaging of waste at the landfill, but this is not understood by either municipality. The building of the MRF is a solution to most waste problems in the city. Integrated Waste Management plans (IWMP) have been developed by the district and they are meant to have waste transfer centres and material recovery facilities; the same thing applies to the Msunduzi IWMP. Talk is cheap when practicality should prevail; both municipalities fail to live up to what their IWMPs say.

We have recently learnt that the Msunduzi Municipality is considering the option of waste incineration as an energy source which would compete with waste recycling projects. Municipal waste incineration has proven to be an unsustainable waste management option. It is expensive to build and sustain, but our city is considering this option instead of looking at the waste recycling option. Waste recycling has so many benefits for the environment and for the people of Pietermaritzburg. The waste pickers’ cooperative has not given up on the MRF – they still have a hope that it will be constructed.

Since negotiations will start between CoGTA, uMgungundlovu and Msunduzi, there is hope that the MRF issue will be resolved soon. During the handover of the memorandum, the recipients promised to start negotiations on the issue of starting the MRF. Unfortunately, the memorandum was not received by the senior officials of local and provincial government and the cooperative is still waiting to hear from them, despite giving the authorities until January to respond. Therefore, Pietermaritzburg may soon be seeing another action by the disgruntled waste pickers.