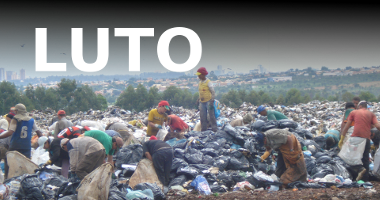 The landfill in the city of Estrutural, minutes outside the Brazilian capital and the National Congress, was the scene of another tragedy on April 2. Vanderlina da Silva Lopes, a waste picker who worked many years at the site, was crushed by a tractor used to bury waste at the landfill, killing her instantly. In protest, waste pickers blocked the landfill until the following week. Members of the Brazilian national waste pickers’ movement (MNCR) were present in solidarity.

In 2014, there were four deaths at the Estrutural landfill – all of a similar nature, involving informal workers getting crushed by machines. The Brazilian government has not complied with its agreements on investing in the closure of the landfill and is working with local governments across Brazil to postpone the deadline of dumpsite and landfill closures.

In the city of Moro Agudo, in the interior of São Paulo, Marolina, a waste picker who collected from door to door, was run over by machinery operated by the collection service there. Another waste picker was killed in Salvador, Bahia, in a similar accident. Access the entire article (in Portuguese).

Tweet
| Landfills | Tags: estrutural, landfills, open dumps, lixao
Comments Off on Another death at the Estrutural landfill, near the Brazilian capital
Comments RSS feed for this post.
Loading Comments...