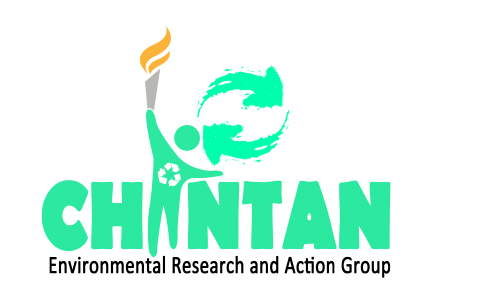 Chintan was invited to a conference of The All India Plastics Manufacturers’ Association on 7th April at the India International Centre, on NGT case on PET and Plastics to regain consumer faith. The invitation was sent via email on April 4th, 2015.

Chintan agreed to attend this meeting to inform itself about the perspectives of the plastic industry, which it tracks and also advocates with. In the past, Chintan has also discussed with them the inclusion of informal sector in their work, a section they have repeatedly exploited by claiming the recyclability of plastics but letting the recyclers work in poor conditions. Chintan has always listened to all stakeholders to deepen its understanding while remaining committed to its vision and mission.

The context of the meet was that the National Green Tribunal (NGT) is of the view that curbs should be imposed on plastic packaging and will begin hearings in less than a month on a matter that could determine how consumer goods companies do business in India. At stake is their ability to use “multi-layered/plastic packaging” and PET bottles, which covers virtually every item of daily use, other than those that come in tins and glass bottles.

However, Chintan’s senior management of Gautam Mehra and Chitra Mukherjee were unceremoniously asked to leave by the President, AIPMA, Mr. Rituraj Gupta, as the AIPMA did not want to discuss its strategy to counter the ban which may be imposed on Plastic manufacturers following the views expressed at a hearing by the National Green Tribunal on March 13, 2015, with Chintan. Chintan would like to state that while it does not expect to be invited to private meetings, when it is, it expects to be treated with respect, as accorded to invitees.

Chintan was thrown out of the conference because of its openly held belief in waste reduction, including of plastics, and because it works with the poor, i.e., wastepickers, who the industry has systematically exploited (by claiming plastic can be recycled but doing nothing for the recyclers themselves). It was thrown out because it is an independent minded organization that can only be influenced by data and empirical evidence, and may not have been useful to the industry.

Instead of working to meet the order of the NGT, and to be responsible corporate citizens, the plastic industry has worked to duck its responsibilities. Organizations like Chintan, who serve as watchdogs, will continue with their work in the public interest and work with other organizations to ensure that the NGT orders are followed in letter and spirit.

AIPMA: The All India Plastics Manufacturers’ Association – popularly known as AIPMA – was founded 70 years ago making it the old & the largest Apex Body of the Plastic Industry in India.

About Chintan: Chintan partners with the informal recycling sector, such as wastepickers and kabaris, to clean up cities, recycle more efficiently and create livelihoods for wastepickers. As a result, it is also able to help children picking trash to go to school, as families earn steadier incomes.