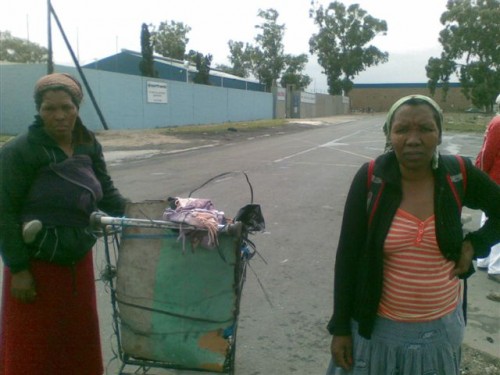 Many men, women and children from working class communities make a living through waste-picking by collecting, sorting, recycling, and selling materials that someone else has thrown away. A lack of employment, education and chronic poverty – associated with neo-liberalism – has forced many women into waste-picking. There is now an initiative underway by women waste-pickers in Cape Town to become organised to fight for their work to be recognised and to improve their working conditions.

Voices from the streets

For the past 16 years, a woman waste-picker, Sis Mpumi, has been attempting to organise other waste-pickers to fight for the recognition of their work. She has been a resident of the Site B informal settlement in Khayelitsha since 1986 and says that almost everyone in Site B survives on waste-picking.

Neo-liberalism and the growth of the informal sector

One of the main reasons why so many people, including women, have become involved in waste-picking is because of neo-liberalism. Neo-liberal capitalism has been disastrous for exploited and oppressed women. Under neo-liberalism, full-time and/or regular employment has gradually been replaced by part-time, temporary and precarious work, especially for women. Thus the informal sector (which encompasses waste-pickers, sex workers, home-based care workers and street vendors) has become more and more prevalent in South Africa and elsewhere since the adoption of neo-liberalism. Women are often the majority of people involved in the informal sector and the number of women involved in waste-picking is also growing.

Sis Mpumi claims that women waste-pickers are generally engaged in very risky and hazardous work. They often don’t have protective clothing and are often exposed to hazardous material when collecting and sorting. As part of the job, women waste-pickers are also at high risk of becoming victims of crime and sexual violence due to the long and irregular hours they work.

Waste-pickers are often looked down upon by neighbours and the community. Sis Mpumi explains that “We are ignored and looked down on because of the work we do, people often perceive us as dirty, vagrants and useless people who want to eat from the waste bins”. The impact of social exclusion for waste- pickers is, therefore, enormous.

Waste-pickers too are exploited and discriminated against by the state and the private sector, including middlemen. In fact, waste-pickers are paid very little by middlemen, who then resell the material collected on for much higher prices. Due to discrimination, women in particular do not always have access to recyclables with highest value, which also negatively impacts on their income levels.

Another problem is that waste-pickers from townships are often barred from other areas where there are more valuable forms of waste. Three of the City’s 6 landfills are closed to township-based waste-pickers and they are often stopped from entering leafy suburbs where the most valuable waste can be found.

In 2010 Sis Mpumi started talking to a group of women in her area who were engaged in waste-picking about organising themselves around the challenges they face as waste-pickers and women. They have now formed a group called Siyacoca, “we are cleaning”, and the group has been gradually growing. As part of organising, they have been participating in political education sessions aimed at strengthening women’s leadership, analysing the constraints and limitations imposed on them by the state and business, and exploring different ways of organising.

Through Siyacoca, Sis Mpuni and her comrades have established local structures throughout Khayelitsha and Philippi. These have become platforms where people talk about the work they do and are used to encourage people to join the struggle. Some of the strategies adopted as tools for organising by these local Siyacoca structures have been education and letter writing to the authorities outlining their challenges and demands. As they do not have a specific space for assembling the waste they collect, through Siyacoca they have started engaging the Municipal Authorities to avail space for this.