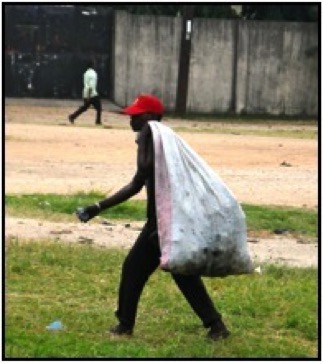 Waste recycling in Dar es Salaam, Tanzania is not spearheaded by any government, private or civil society initiative but rather by the efforts of an informal army of self-employed, micro-entrepreneurial waste pickers. Such a substantial human resource can play an instrumental role in cleaning up Tanzania’s capital if sufficiently understood and mapped out, however previous scholarship covering this invisible sector does not exist. One on one interviews and focus group discussions are conducted with fifty waste pickers across Dar es Salaam. A total of fifteen informal recycling transfer stations and one official government managed dumpsite is mapped out across the city that respectively support the operations of approximately 1,237 waste pickers. Waste pickers were found to have a collection capacity of up to twenty kilograms per day and an income potential of $108USD per month based on identified market rates for the most commonly traded waste materials.

One-on-one interviews were held with three waste pickers at each informal recycling transfer station and eight waste pickers at the city dumpsite, Pugu Kinyamwezi amounting to fifty waste pickers interviewed across fourteen different informal recycling transfer stations and one city dumpsite. Waste pickers were questioned on a wide range of topics including: health, safety and use of personal protective equipment during work, travel patterns, carrying capacity and use of non-motorized or motorized transport during work, market trading trends in relation to the sale of collected recyclables, recyclable materials collected and traded and the average monthly income from the trade of recyclables.

Situated on the tropical shores of East Africa, the diverse and opportunity rich metropolis of Dar es Salaam, Tanzania’s largest city is enjoying rapid economic growth. Dar es Salaam is now the world’s eighth fastest growing city by population, and Africa’s third fastest developing urban area. This rapid growth, however, has created in its wake a serious waste management challenge. The city generates some 4,260 tonnes of waste daily, of which only 30% is managed and dumped legally at the Pugu Kinyamwezi Dumpsite found in the outskirts of the city. The remaining 70% is either disposed of informally or illegally dumped into waterways, fields, or burned causing a variety of health, economic and social related consequences.

In 2010 and 2013, Dar es Salaam was rated the eighth and twelfth filthiest city in the world by NYC Consulting and Forbes respectively. The United Nations rates Dar es Salaam’s waste management structure as ‘well below average’ and newspapers, pop artists and films mock the city for its unsightly and smelly vistas.

Despite the horrors that Dar es Salaam’s waste management situation represents however there is great potential for ground breaking waste management developments in Dar es Salaam. One obvious solution that has not been realised is the identification, mapping out and mobilisation of Dar es Salaam’s waste pickers whom currently operate large scale recycling operations invisibly. Recycling in Dar es Salaam by waste pickers is a micro-economic activity that should be promoted and understood as Tanzania seeks to clean up its capitol.

The informal network of waste pickers and informal recycling transfer stations in Dar es Salaam is providing a commendable environmental and waste management service to the city. This study finds however that there is great potential for the development of this informal human resource. From training opportunities and basic forms of personal protective equipment to coordination through waste picker alliances and cooperatives there are a variety of methods that waste pickers could employ to improve their working conditions and maximise their profits. Additionally, there are obvious opportunities for actors in the formal sector, such as stakeholders in government, the private sector or civil society who could benefit from the services of waste pickers through mobilising this human force for common goals. Through multi-stakeholder participation and the establishment of a bridge between the informal and formal, waste pickers and leaders, entrepreneurs and visionaries of Dar es Salaam can realise a cleaner metropolis for all.

Joshua Palfreman is an urban planning and waste management professional with over six years of experience in East Africa. In 2009, he founded WASTEDAR, an NGO providing waste management services in Tanzania. Josh currently provides technical assistance to DFID on waste management programmes run by the development arm in Kenya and has recently published works relating to waste pickers and innovative collection models tailored to developing world waste characteristics and resources; work that will feature in this year’s Fifteenth International Waste Management and Landfill Symposium in Sardinia, Italy.